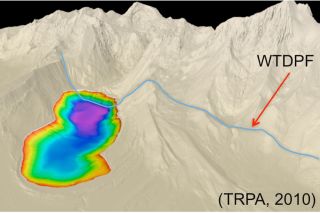 A lidar image of Fallen Leaf Lake in the Lake Tahoe Basin. The blue line is the West Tahoe Fault. The rainbow hues reflect the depth of the lake.
(Image: © Jillian Maloney, Scripps.)

SAN FRANCISCO — A tsunami-producing fault in Lake Tahoe is overdue for another earthquake, scientists said here yesterday (Dec. 4) at the annual meeting of the American Geophysical Union.

The West Tahoe Fault is capable of producing a magnitude-7.3 earthquake and tsunamis up to 30 feet (10 meters) high in the clear blue lake, where million-dollar homes line the shore, researchers said.

Earthquakes strike every 3,000 to 4,000 years on the fault, and the most recent shaker was 4,500 years ago, indicating the fault is overdue for another earthquake, said Jillian Maloney, a graduate student at the Scripps Institution of Oceanography in San Diego.

The West Tahoe fault defines the west shore of the lake, coming on shore at Baldwin Beach, passing through the southern third of Fallen Leaf Lake, and then descending into Christmas Valley near Echo Summit.

To trace the fault's history, Maloney and her colleagues examined data from a CHIRP seismic imaging system, which details underwater sediment layers at very high resolution. (CHIRP stands for compressed high intensity radar pulse.) The researchers correlated landslide deposits, which could be related to past earthquakes, throughout western Lake Tahoe and in small lakes immediately to the south with radiocarbon dates from the sediments.

The West Tahoe Fault has a complicated history, the analysis reveals. The fault appears to alternate between breaking all at once, in a 31-mile long (50 kilometer) fracture, and in smaller, shorter segments. The discovery has implications for the Tahoe's seismic hazard, because the size of an earthquake relates to the length of a fault rupture, Maloney said. The biggest earthquakes come from the longest fault fractures.

The correlations, while still at an early stage, indicate the last time the fault's entire length ruptured was 7,800 years ago, Maloney told OurAmazingPlanet. More recent quakes occurred on individual segments, she said.

Because the fault crosses the lake, scientists worry a future earthquake will cause a tsunami in Lake Tahoe. The monster waves could form in two ways: by the fault displacing ground under the lake, similar to Japan's Tohoku tsunami, or by causing landslides that displace the water. A combination of both could also create an even bigger wave.

Layers of sediment preserved in and around Lake Tahoe record evidence of past tsunamis, said Graham Kent, director of the Nevada Seismological Laboratory in Reno.

However, having smaller earthquakes on the West Tahoe Fault would be better for the ski town. "If it breaks up into multiple segments, it might not be as great a tsunami risk," Kent told OurAmazingPlanet.

The most recent earthquake in the Tahoe region was about 575 years ago, on the Incline Fault, which becomes active about every 10,000 to 15,000 years. Scientists estimate its earthquake size potential at magnitude 7.

At more than 1,645 feet (501 meters) deep, Lake Tahoe, which straddles the California and Nevada border in the seismically active Sierra Nevada region, is one of the world's deepest freshwater lakes.