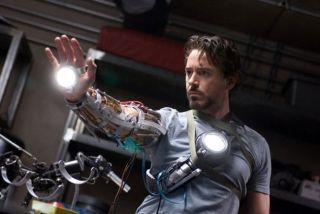 How is the Iron Man suit made? We admire the result in the movie (still number one this week at the box office); the comic book version states that the Iron Man suit circuits were created using a process called biological circuit fabrication:

"Micro-Scale suit tiles fabricated by genetically engineered metal affinity bacteria which assemble themselves in specific orderly arrays, then expire, leaving behind various metallic deposits which form all the metal shapes and microscopic circuits."

Now, a group of scientists led by Michael Sussman, director of University of Wisconsin, Madison's Biotechnology Center, and oceanography professor Virginia Armbrust of the University of Washington, are seeing if diatoms will help make even smaller integrated circuit chips by a similar process of biological fabrication.

Diatoms are unicellular algae; they form a unique shell, called a frustule. They work hard to make human life possible; they produce about a third of the world's oxygen.

Their cell walls - the shell - is created from silicon dioxide, or silica. Sussman's interest in diatoms is based on the fact that diatoms are capable of creating lines of silica much smaller than present chip manufacturing processes can make out of silicon.

Sussman and Armbrust's group have been working with the diatom Thalassiosira pseudonana. Armbrust previously led the effort to sequence T. pseudonana's genome in 2004. The group has identified 75 genes that are used in the diatom's silica bioprocessing, and they hope to use genetic manipulation to use diatoms to draw lines on computer chips.

"If we can genetically control that process, we would have a whole new way of performing the nanofabrication used to make computer chips," says Sussman.

Biological circuit fabrication is not the only "comic book" technology that real-life scientists are trying to bring to life. Researchers in Germany are working on spinning webs like Spiderman and an American firm is working on blast-resistant fabrics like a superhero suit.