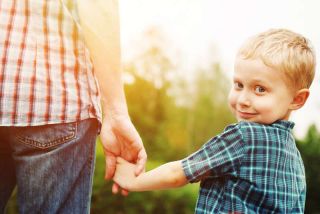 New research suggests men will care for their sisters' kids even if they're confident their wives' kids are their own.
(Image: © Solovyova Lyudmyla | Shutterstock)

In about 10 percent of human societies, men transfer their inheritances not to their own children, but to their sisters' offspring. Now, researchers say they're closer to understanding the evolutionary pressures that make this arrangement tick.

In fact, many factors, from polygamy to high levels of infidelity, can contribute to this fraternal arrangement, according to a new analysis by University of Utah anthropologist Alan Rogers. Previous research has suggested that men would only invest highly in their sisters' kids if they believed that their wives' children belonged to other men. Rogers' new model suggests that's not the case.

"Evolution can favor this pattern of paternal investment even when paternity confidence is high," he told LiveScience.

In the 1970s, anthropologists turned to probability to try to explain why a significant minority of societies transferred resources along matrilineal lines — not from the father to his children, but through the female line of the family so that brothers would support sisters' kids.

Making a series of assumptions, they concluded that when men were only about 25 percent (or less) sure the children birthed by their wives were their own, they'd turn to supporting their sisters' children instead. That's because at that so-called "paternity threshold," men could be equally or more certain that their sisters' kids were genetically related to them as their own supposed children. [6 Scientific Tips for a Successful Marriage]

The problem is, that threshold is simply too low. In modern-day societies, paternity-certainty threshold hovers between 0.7 and 1, said Laura Fortunato, an anthropologist at the Sante Fe Institute, who was not involved in the study. That means men are generally at least 70 percent certain their wives' kids are theirs, if not 100 percent sure, and so caring for nieces and nephews shouldn't emerge.

But that pattern does exist. So Rogers looked into the original calculations. He found that the models made unrealistic assumptions about how people lived.

"One of them was that every woman in the population has the same number of extra-pair partners, that sort of all women are equally promiscuous. Another one was that each woman had an infinite number of partners, of extra-pair boyfriends," Rogers said. "I mean, it's just crazy stuff."

By loosening the assumptions and making them more realistic, Rogers found that the paternity threshold could be as high as 0.50 — or a 50-percent (or less) certainty that his wife's kids were his own before he'd turn to supporting his sisters' kids. But even that is an overly simplistic take on the issue, he warned.

"We actually have to move away from this notion of one value," he said.

In her own work, Fortunato has found the same thing. Too many individual factors play into the structure of inheritance in a society to boil it down to a single number about paternity certainty, she said. For example, in a society where men can take more than one wife, it's a good bet to have uncles pitching in to care for the kids. After all, every wife has her own brothers who will contribute, while the father only has to worry about his own sisters' kids.

Personal interactions matter, as well, Rogers said. For example, inheritance decisions are not strictly male; the women in a society get a voice, too. If a man takes too little care of his sister's kids and lavishes resources on his wife's (or vice versa), he may get pushback from the neglected side of the family.

Anthropologists stopped focusing on the matrilineal inheritance question after getting "stuck" in the 1970s, Fortunato said, adding that Rogers' work is a way to get "unstuck." The goal, she said, is to better understand how evolution shapes family structure.

"Even though this is a minority practice in some ways, it still gives us an insight into human nature and how humans work and how they structure social life," Fortunato said.

Rogers reports his findings today (Nov. 27) in the journal Proceedings of the Royal Society B.