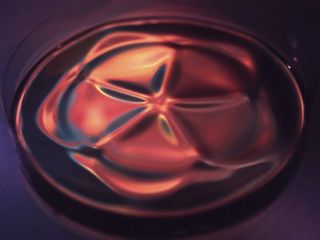 This starfish-shaped wave was created by vertically vibrating liquid in a container. The wave pattern alternates between looking like a star and looking like a pentagon.
(Image: © Jean Rajchenbach, Alphonse Leroux, and Didier Clamond (CNRS and Université de Nice, France))

A dreamy new exhibition of images showcases the art of physics, from the beauty of a bubble rising to the flow of water around coral.

The images, part of the American Physical Society's Division of Fluid Dynamics Gallery of Fluid Motion, are drawn from the most artistic and evocative research presented at the Fluid Dynamics annual meeting. The meeting was held from Nov. 18-20 in San Diego.

A panel of referees chose the images based on artistic merit and ability to represent complex physics topics. Among the honorees is a photograph of a flow of honey spiraling as it hits the surface of water in a crystal goblet, representing "liquid rope coiling," a physics phenomenon that should be familiar to anyone who has ever poured a stream of honey onto a biscuit. In the water, the coiled flow stretches and deforms before settling on the bottom of the glass. [See the Fluid Dynamics Images]

Another image shows a beautiful blue-and-white mix of water and an elastic solution made of polyacrylamide, which is used in the process of making soft contact lenses. The image shows the water and the blue-dyed polyacrylamide undergoing a "hydraulic jump," which occurs when a fluid changes from a fast, parallel (or laminar) flow into a slow, turbulent flow.

In one multiple-exposure image a shiny bubble rises to the top of a tank, transforming into a donut shape because of pressure differences between the top and bottom of the bubble. Another striking photograph shows the water disturbances caused by hairlike cilia on coral, which are marine animals made up of a polyp ringed with tentacles. As coral beat these tiny appendages, they stir the water, which may increase the rates of photosynthesis for the algae that live on them, while keeping at bay nasty microbial pathogens.

One image even has a do-it-yourself flare. A yard faucet attached to a specialized inlet and acrylic tube creates a spraying plate of water that disintegrates around the edges into playful droplets. This simple feature could be used in home yard displays and landscaping fountains, according to the creators.

The honored images will be printed in the journal Physics of Fluids and will be on display at the annual meeting of the American Physical Society in Baltimore between March 18 and 22.