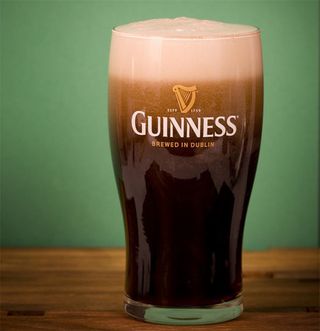 The secret to the sinking bubbles in a frothy glass of Guinness may lie in the shape of the pint glass.
(Image: © Dreamstime)

The mystery of why the bubbles in the legendary beer Guinness sink as opposed to rise as one might expect has finally been solved — the secret apparently lies in the shape of the pint glasses from which Guinness is often sipped, researchers in Ireland say.

After one pours a glass of the famous Irish stout Guinness, the white bubbles settle downward. Since bubbles are lighter than beer, one might think this defies the laws of gravity.

"In one's everyday life, one rarely comes across such a counterintuitive phenomenon, challenging equally the imagination of a university professor as well as that of Bill, John and Harry from the local pub," said researcher Eugene Benilov, an applied mathematician at the University of Limerick in Ireland.

The solution to this puzzle lies in how the beer flows in the glass. The beer flows downward near the walls of the glass, dragging the tiny bubblesalong with it, and then upward in the interior. This circulatory pattern eventually leads to a creamy white head of foam resting on top of the black brew.

The question, then, is why the beer flows this way in the first place. Now computer models and lab experiments reveal the answer lies in the geometry of the pint glasses in which stouts are typically enjoyed.

Normally, if you started with a perfectly straight cylindrical glass, all the bubbles in the beer would rise together from below. However, pint glasses are typically narrower at the bottom and wider at the top. There is more space under the wide flat middle of the glass than under its angled walls, which means more bubbles rise from the middle than the sides. This higher density of bubbles in the middle of the pint glass leads to a kind of fountain of beer there, with a strong upward rush of bubbles from the middle that ultimately results in the brew flowing downward along its sides and then back up. [The Physics of 7 Everyday Things]

"Don't drink too much Guinness while testing our conclusions!" Benilov told LiveScience.

Such research might not only solve a mystery of beer. Understanding these kinds of bubbly flows could help control how bubbles flow in champagne glasses, designing pint glasses that minimize the notoriously long time it can take for bubbles in stouts to settle, and certain industrial chemical processes involving bubbly flows.

Benilov and his colleagues Cathal Cummins and William Lee have submitted their findings to the American Journal of Physics.