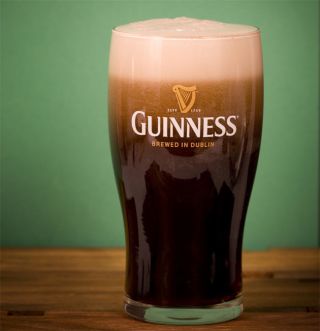 Mathematicians have come up with an alternative to the beer widget responsible for a stout's creamy head.
(Image: © © Marilyn Gould | Dreamstime.com)

When you celebrate St. Patrick's Day, consider giving a toast to the science behind the stout.

Irish stouts, and stouts that emulate them around the world, have a distinctive frothy and creamy head. In many stouts, that smooth texture is formed with the aid of a device developed by Guinness called a widget.

A widget is a small plastic ball that brewers place inside the beer can, and when the can is opened, the widget triggers a rapid decompression of nitrogen gas throughout the drink.

Whether in can or draught, the flood of nitrogen gas is what produces the tiny bubbles —without affecting the taste — that lend the beer its smooth and creamy character.

Applied mathematicians in Ireland recently discovered a possible replacement for the widget that is not only eco-friendly, but could be cost-effective for brewers. They published their findings in the Mar. 8, 2011, issue of the journal Nature.

Graduate student Michael Devereux, supervised by William Lee of at the University of Limerick in Ireland, discovered that microscopic plant fibers can froth stout as well as a widget.

"Our proposed alternative to the widget would consist of an array of cellulose fibers of approximately three square centimeters," said Devereux. "Our research suggests that stout could be made to foam using an array of fibers in 30 seconds, which is the time it typically takes to pour a glass of stout."

Inside of a nitrogen-enriched stout, pockets of air trapped inside cellulose fibers become seed bubbles that trigger nucleation (the formation of additional bubbles). As nitrogen and carbon dioxide diffuse through the walls of the fibers, the seed bubbles grow. When each bubble reaches a certain length, it detaches and breaks off of the gas pocket and floats to the top of the liquid. This process is repeated until the gas dissolves completely into the stout.

Lee and Devereux recorded how stouts react to that process under a microscope, watching how the bubbles formed inside the cellulose fibers. What they discovered was that the bubbling rate of stout beers was 20 times slower than the rate for most carbonated drinks.

"This research may also be of interest to champagne researchers, too," Devereux added.  "We have noticed that it is much easier to study nucleation in stouts than it is in champagne and other carbonated liquids, because of the slow rates of bubbles. Stout beers may prove to be a useful model system in which to study nucleation in carbonated liquids."

Stout is a matter of national pride for Ireland, and if Lee and his team's calculations are correct, not only will they will have created new research leads in fluid dynamics, they will have made their mark on an industrial and cultural scale.