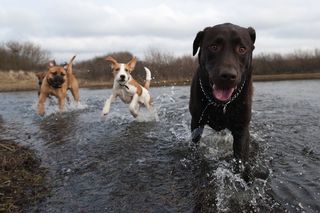 Several dogs in Ohio have been sickened, and four have died, from a disease that may be caused by a newly discovered virus.
(Image: © Eric Gevaert, Shutterstock)

Dogs can learn the names of objects, but they likely focus on different features when learning words than humans do, new research finds.

When toddlers learn words for objects, they focus on shape. This means that once your kid gets that a tennis ball is called a "ball," they're quick to realize the same word applies to beach balls, basketballs and golf balls.

University of Lincoln researcher Emile van der Zee and his colleagues were interested in finding out whether dogs have this shape bias, too. Plenty of evidence suggests dogs can learn words; Rico, a Border Collie that died in 2008, reportedly understood more than 200 simple words. An investigation of Rico published in 2004 in the journal Science found that he did indeed have an extensive vocabulary. Other Border Collies have been reported to have similar talents. [What Your Dog's Breed Says About You]

What's not clear is whether dogs comprehend words the same way humans do. To find out, van der Zee and his colleagues tested a 5-year-old Border Collie named Gable. They created objects of various shapes and textures and taught Gable made-up words such as "dax" to describe them.

The researchers found that when asked to go retrieve a specific object, Gable generalized the word based on size. When given a choice between a dax-size object and a larger object and told to "get the dax," Gable picked the dax-size object every time, regardless of texture or shape.

A second experiment gave Gable the choice between an object shaped like the one he was asked for and an object of the same size. A human would go for the similar shape, but Gable again based his decisions on size.

When given a toy for several months and then tested, Gable began to associate the word for that object with texture more than size, the researchers found. Clearly, the dog's word learning works very differently than it does in humans, they conclude today (Nov. 21) in the open-access journal PLoS ONE.