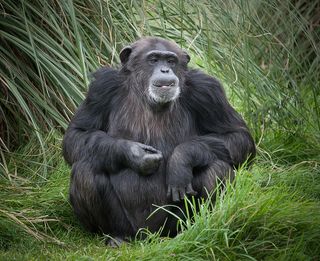 The findings, published Nov. 19 in the journal Proceedings of the National Academy of Sciences, suggest the dip in happiness that frequently occurs during the mid-40s for today's humans may have its roots in physical or hormonal changes, rather than the stresses of modern culture.

"Biology and physiology have to be at the top of a list of possible explanations" for the appearance of similar crises in both apes and humans, said study author Andrew Oswald, a statistician at the University of Warwick in the United Kingdom. "That's what we share in common. Apes don't have mortgages and divorces and school fees to pay, and all of the paraphernalia of modern life."

For decades, scientists have noticed that humans around the world seem to be least happy in their 40s.

"We've known there's a kind of giant U shape, where people are at their most miserable in their midlife," Oswald said. [7 Things That Will Make You Happy]

But most researchers chalked up the midlife blues to the vagaries of modern midlife such as economic worries and time crunches.

Oswald and his colleagues wanted to see if there was a biological explanation for this trend. His team asked zookeepers at 65 zoos to rate happiness in more than 500 chimpanzees and orangutans. Among the questions, zookeepers were asked whether the apes were in good moods, whether the animals got pleasure from socializing and whether they achieved their goals. Researchers also answered the question, "if you were that ape, how happy would you be?"

The researchers found that happiness in apes followed the same U-shape curve as that found in humans, with midlife apes seeming the most discontented compared with younger and older primates. (Apes live about half as long as humans do, so they reach midlife in their late 20s to early 30s.)

While the findings are intriguing, the study would have benefited from including less subjective measurements, such as levels of stress hormones, Frans de Waal, a primatologist at the University of Emory who was not involved in the study, wrote in an email to LiveScience.

"The judgment of happiness is hard enough in humans, and here we have humans judging the happiness of apes," De Waal wrote. "The study thus scores the well-being of animals through a human filter, perhaps introducing human bias."

Still, the findings imply that some biological factors common among humans and apes, such as physical traits, hormone levels or the development of emotional regulation skills often described as wisdom, may explain why older people are happier than middle-age ones, de Waal added.

If true, that means people should give themselves a break for feeling low in middle age, Oswald said.

"There are very good reasons to think that a midlife crisis is inevitable for the average person and it's really hardwired," he said. "So we should forgive ourselves for the midlife low and [know] it will get better."