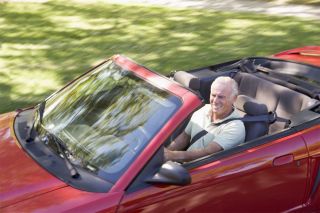 The idea that a man wakes up one day to find his hair is graying and his life is "over," so he buys a red sports car…is a myth.
(Image: © Dreamstime)

He — the person is usually depicted as a "he" — turns off the alarm, stares into a bowl of soggy cereal, puts on a tired-looking suit and goes to the office for more of the same drab routine. And so it continues until one day, usually the day he realizes he is mortal (or starting to lose his hair), he goes berserk: He bangs his secretary, quits his job and buys a red convertible.

And we all nod, acknowledging the inevitable midlife crisis. One made Monica Lewinsky famous, another won an Academy Award for "American Beauty," and the concept is as embedded in our culture as the belief in the power of positive thinking.

But the idea that midlife crises are common is a myth, experts say.

"It makes for good novels or good movies, but it is not really accurate," said psychologist Margie Lachman of Brandeis University in Massachusetts.

"There is no specific time in life that predisposes you to crisis," said Alexandra Freund, a life-span researcher at the University of Zurich in Switzerland.

"There can be times when things crystallize as very problematic, a very deep disturbance in your life," Freund told LiveScience. "People experience these types of crises, but they are not at all related to age."

Instead, Lachman said, crises are usually spurred by some event that can happen at most any age, such as a career setback, the death of a friend or relative, or an illness.

Epidemiologists have found no spike in negative events – such as career disillusionment – in middle age, Freund explained.

So if the revitalized libido and sudden hankerings for sports cars are purely the stuff of Hollywood, then what does happen to a person during these years? [7 Ways the Mind and Body Change With Age]

One of the popular misconceptions is that midlife crises are spurred by a sudden realization that the values and goals of youth have been abandoned for more comfortable, and achievable, aspirations; that the person has "sold out."

Freund finds such concerns puzzling. "Selling out to whom?" she asked.

In the process of figuring themselves out, young people will wrestle with establishing personal goals and values. After young adulthood, however, personality remains relatively stable for the rest of one's life, researchers have found.

As for goals, new ones are usually variations of the original goal and are aligned with the person's core values, Freund said. For example, a person may be focused on contributing to academia — first, as a graduate student, by publishing papers in her mid-20s, but then, in her 50s, through teaching undergraduates. It's not the values that usually change, it's the approach.

Some cultures don't even have a concept of midlife, let alone a midlife crisis, according to research presented in Richard Shweder's book "Welcome to Middle Age! And Other Cultural Fictions" (University of Chicago Press, 1998).

But in Western cultures, midlife is typically defined as anywhere from 30 to 75 years old, depending on the age of the person asked. When pressed, psychologists say midlife is between 40 and 65 years old, placing some Oscar nominees smack in the middle – that's right Colin Firth, Javier Bardem (of "Biutiful"), Annette Bening, and even Nicole Kidman has just stepped into the ring. But Lachman and Freund stress that chronological age is not the best marker.

Perhaps a better definition is being the middle age within one's social niche. In midlife, people typically have close relationships with people both older and younger than themselves. For example, many middle-age adults are caring for not only their kids but also their aging parents.

Midlife without the crisis

In middle age, people tend to focus on making positive contributions to society through the interactions with people of significantly different ages. Such interactions include formal and informal mentee/mentor relationships, stratified workplace relations and cross-generation family dynamics.

Middle-age adults are "no longer driven, but now the drivers," say researchers Bernice Neugarten and Nancy Datan in their paper "The Middle Years" ("The Foundations of Psychiatry," Basic Books, 1974).

Critically, middle adulthood comes with a greater sense of control then other life periods. Young adulthood, by contrast, is usually a time of striving, and late adulthood is typically a time of loss, including of one's job, health and friends.

The most common complaint in midlife is not boredom, as many young people fear, nor a feeling of crisis. "People are experts of themselves at this age," Freund said. "They know what is good for them and what isn't."

Rather, researchers conducting large surveys have found that the main problem for middle-age people is feeling unable to get everything done.

"In middle adulthood, you are living at your fullest. You've achieved a lot in your job, the kids are growing up, you are healthy and have more resources than when you were a student. There is not much mortality in your social circle. … You know where you are going and don't question yourself all the time anymore," Freund said.

Not that midlife is void of critical changes: Menopause, andropause (male menopause), the emptying of the nest, and the death of a parent all often happen during middle adulthood. But not everyone sees these changes as negative. Menopause and an empty nest, for example, can result in a newly flourishing sex life.

When people in their later life were asked what age they would most like to be, they usually said the mid-40s, Freund said.

The origins of a myth

If midlife is actually so great, where did this concept of a midlife crisis come from?

In the 1960s, a psychologist named Elliott Jaques coined the term "midlife crisis" based on his studies of clinical patients and artists, who were dealing with depression and angst about getting older.

The term "midlife crisis" caught on like wildfire, because everyone knows someone who fits the mold, Freund told LiveScience. But what about all the people we know who don't fit the mold?

Freund, Lachman and most modern psychologists dismiss Jaques' case studies as not representative of the average Joe. "Artists are known to dramatize their lives; it is their job almost," Freund points out, and the more neurotic among us are more prone to crises in any life stage.

Despite decades of research debunking it, the concept lingers in Western culture, particularly in its application to men. The original promoters of the midlife crisis theory painted a picture of men as "late bloomers," Freund said, who bumbled along without thinking until they heard a wake-up call in midlife. More recent research, Freund said, has shown that men are just as self-reflective as women, and that neither gender is prone to life-changing crises based on age.

As for the idea that midlife spurs worries about mortality, Freund says the timing is off. People tend to think about death in adolescence, when they realize it will really happen to them, and then again in late life, when they realize their time is coming. In middle adulthood, people are too busy to worry much about death, she said.

Still, the concept of a midlife crisis may be useful even if it is a misnomer. In midlife, we get a glimpse into later life, and we can make appropriate adjustments "physically, financially and socially," Lachman said. For example, the first signs of chronic illness appear in middle adulthood — at a time when something can still be done about them.

Most people, however, make adjustments throughout life, not just in midlife. "Life is a process, life is everyday," Freund said. "It is all cheesy stuff, but it is true."