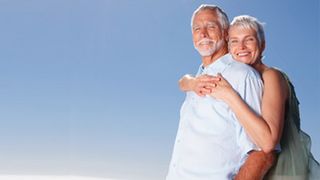 The roller coaster of life may be an apt analogy, at least for a person's happiness. After an all-time high as youths, life satisfaction declines as people enter their 40s and 50s. The good news is it rebounds slightly later in life, possibly because worries drop and contentment grows, new research suggests.

Population-level happiness ratings form a U-shaped curve over lifetime, starting out high in youth, maybe because of an optimistic outlook. As people age, enter the work force and start having families, happiness levels drop and eventually bottom out between the late 30s and early 50s.

"When you look at the 65-year-old and 25-year-old they have the same levels of happiness," said study researcher Bert Van Landeghem, of Maastricht University in the Netherlands. "But, the 65-year-old wouldn't want to live the life of a 25-year-old, their life aspirations have changed."

Interestingly, this level drops off again around age 75, perhaps because of loss of friends or poorer health and lucidity.

Van Landeghem's study followed a group of almost 45,000 Germans from 1984 to 2007 (they were between 17 and 85 when the study started). Every year, each person answered the question, "On a scale of 0 (very unsatisfied) to 10 (very satisfied), how satisfied are you with your life, everything taken together?"

The changes in happiness levels over a lifetime are the equivalent of the dip in well-being most people have when they experience negative life events like disability or unemployment. Previous research has shown these fluctuations might result in increased worry during midlife. Perhaps this decline in satisfaction is one reason most parents overestimate their happiness when faced with the economic cost of children.

Other emotions, such as anger and sadness, show different curves. Levels of stress and anger decline sharply after puberty, while sadness levels are flat in every age group, Van Landeghem told LiveScience.  In fact, past research has shown that people in their mid- to late-50s experience less stress and worry than those in their 20s.

Other studies have shown slightly different results on happiness levels over a lifetime. For instance, Kennon Sheldon of the University of Missouri told LiveScience that his data points to a slight increase in well-being with age, without the U-shaped dip. He has seen that older adults are more motivated to do things for their own interests and feelings than based on guilt or pressure from others, though, which might help explain their greater happiness, he said.

The debate continues, though, because similar U-shaped patterns are seen in other data sets, including several studies in the United States. Daniel Mroczeck, of Purdue University in Indiana, led one of these studies. His work focused on participants over 50, but also found the same bump in happiness in old age. Some research has gotten so bold as to narrow down what makes for happiness, suggesting it comes with being old, male and Republican.

And while the newly identified U-shaped pattern shows up consistently in many populations, it doesn't mean happiness dips in mid-age for every person.

"The overall pattern may show convexity [a u-shape] over the life span, but a concave [n-shaped] pattern from 50 and up; however, this is an average pattern," Mroczeck told LiveScience in an email. "What is often ignored is that large amount of interesting variation around the overall pattern."

The work is being presented by Van Landeghem at the Royal Economic Society's annual conference in London.