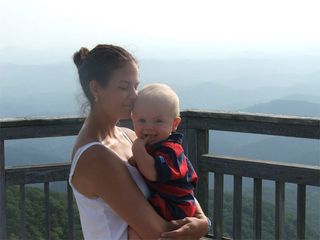 Are the long nights and financial burdens of parenting really worth the emotional benefits? New research is saying no: When confronted with the real economic costs of having children, most parents will exaggerate their happiness to validate their choice to have children.

"Many people believe that to be truly fulfilled in life, it is necessary to experience the joys of parenthood. Children are considered an essential source of happiness, satisfaction, and pride,"  Richard Eibach and Steven Mock of the University of Waterloo, wrote of their study in the March 2 issue of the journal Psychological Science. "However, the idea that parenthood involves substantial emotional rewards appears to be something of a myth."

But, times are changing. Since the 1920s, the economic value of having children has been dropping fast. Children can no longer work on farms or bring home paychecks, and they demand more financial support than ever before, the researchers say.

If they are, many parents are in the dark about it. In a Pew Research Report, published in May of 2010, 87 percent of mothers giving birth in 2008 stated "the joy of having children" as the reason they decided to have their first (or only) children.

While many parents stand by their emotionally priceless children, multiple studies have concluded these rewards are something of a myth — or at least greatly exaggerated, said the study researchers.

"Children's declining economic value may have been a contributing cause of parents' increasing exaggeration of children's emotional value," the researchers wrote.

In the study, 80 parents were asked to read through some information on the financial costs of raising children (including facts such as a child costing $190,000 from birth to age 18), and then asked how emotionally satisfying having children was. As a control, another set of parents were given the same reading material, but were also given information about how grown kids help support their parents. They were then asked how they felt about various issues related to parenting.

The parents who read only about the costs of parenting were more likely to say that they received more emotional satisfaction from parenting, wanted to spend more time with their kids and had more fun when spending time with them compared with the control group.

"The costs of raising children motivate parents to idealize parenthood," the authors write. "The perceived joys of parenthood may thus be a rationalization of the high costs of having children."