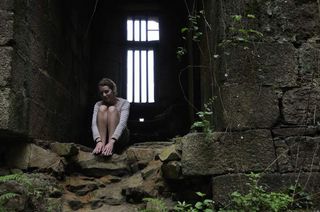 The sometimes disturbing world of our dreams may be grounded in everyday experiences.
(Image: © Eric Fahrner | Shutterstock)

The realm of sleep and dreams has long been associated with strangeness: omens or symbols, unconscious impulses and fears.

But this sometimes disturbing world of inner turmoil, fears and desires is grounded in our day-to-day experience, sleep researchers say.

His work and others' explores the crucial link between dreams and learning and memory.

Dreams allow the brain to work through its conscious experiences. During them, the brain appears to apply the same neurological machinery used during the day to examine the past, the future and other aspects of a person's (or animal's) inner world at night. Memory is the manifestation of this inner world, Wilson said.

"What we remember is the result of dreams rather than the other way around," he said.

His work, and that of fellow panelist Erin Wamsley, a sleep scientist at Beth Israel Medical Center/Harvard Medical School, focuses on the relationship between memory and dreams in non-REM sleep. Vivid dreams often occur during REM sleep, named for the rapid eye movement associated with it, however, non-REM sleep also brings dreams but they are more fragmentary.

In a study published in the journal Current Biology in April 2010, she and colleagues found that study subjects who entered non-REM sleep and dreamed about a video game maze they had played hours earlier saw their performance increase dramatically more than those who slept but did not report any maze-related dreams. Meanwhile, thinking about the maze while awake did not improve the players' performance.

Although this work focused on non-REM sleep, incorporation of learning happens in all stages of sleep, Wamsley told the audience.

Wamsley has also used another video game, this one of a downhill skiing, to probe the relationship between dreams and learning. Like the maze, this game was intended to be interactive and exciting for the subjects, Wamsley said.

Subjects reported their dreams after playing, and initially, their dreams put them directly back into the game, as if rehearsing. But as they fell deeper into sleep, their dreams became more extractive with less literal relationship to the game, she said. For instance, one subject described following boot prints in the snow.

This may be because in deeper sleep, the brain is trying to extract meaning from the experience earlier in the day. The subject's dream about boot prints may have been a way to refine the dreamer's concept of how to move through snow, she said.

Like some of Wamsley's subjects, Wilson's also dreamed of mazes, but these mazes were real.

By accident, Wilson found when rats fall asleep their brains replay parts of their experience in a maze. By using fine electrodes to eavesdrop on the activity of single neurons in the hippocampus, a region of the brain associated with spatial memory, he saw this happen.

Individual neurons in rats' and humans' hippocampuses fire in response to spatial location, so each time a rat passes a certain point within the maze a single neuron fires. Once the rats fell asleep, Wilson found these neurons would fire as they were reactivated in patterns that represented brief segments of the maze, which could be run forward or in reverse, Wilson found.

In the future, science may develop ways to control cognitive functions enhanced by sleep, "using sleep and dreams as a tool the way we use learning and teaching while we are conscious," he said.

In one study, he and colleagues successfully manipulated the content of rats' dreams with a tone they had used earlier to direct the animals as they navigated a maze. The tone caused the rats to dream of the section of the maze they had been taught to associate with that tone.

No one can speak to the value of sleep more than someone deprived of it. Alan Berliner, a filmmaker who explored his own insomnia in his 2006 documentary "Wide Awake." offered that perspective to the discussion. [5 Fun Facts About Sleep]

"Every night when I put my head on the pillow, it's like an adventure," Berliner says in a clip of the film played during the discussion. He described songs, particularly Leonard Cohen's "In My Secret Life," looping in his head and his thoughts racing uncontrollably.

"I started to think the expression human error means sleepiness," he said in the film.

The discussion, presented in collaboration with the Imagine Science Film Festival, was moderated by Tim McHenry of the Rubin Museum of Art.