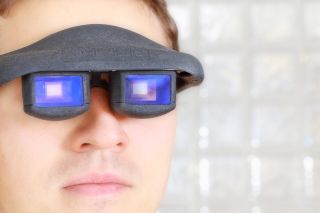 Users can control the display of these data glasses with their eye movements.
(Image: © Fraunhofer COMEDD)

The simple act of turning a page has begun to look outdated with iPads replacing books and manuals for many working professionals. But an augmented reality display similar to Google Glasses frees up wearers' hands by allowing them to turn virtual pages using their eyes alone.

Such a display comes in the form of futuristic glasses that allow wearers to see virtual maps, drawings or other images — up to 3 feet (1 meter) in size — projected in front of their eyes. A chip smaller than half the size of a postage stamp can detect the wearer's eye movements so that they just need to glance at an arrow key to turn a page in a virtual instruction manual or book.

"The data glasses allow us to see the real world in the normal way, while at the same time registering our eye movements with the camera," said Rigo Herold, project manager at the Fraunhofer Center for Organics, Materials and Electronic Devices Dresden in Germany.

Such eye movement control frees up the hands of the glasses wearers entirely so that they can focus on their real-world work — whether they're U.S. military mechanics trying to fix armored vehicles or hospital surgeons doing a marathon operation.

The hands-free technology for the augmented reality glasses may also represent the future direction for Google Glasses. That head-worn display made by the Internet search giant was made public as something that requires hand control, but TechRadar noticed that Google has since patented eye-tracking technology for its glasses.

"Despite the fact that Google's data glasses, for instance, might be a little more stylish in appearance, navigating through the menu still requires using joysticks, whereas our glasses do not," Herold said.

Researchers plan to exhibit the technology at the Electronica 2012 trade fair in Munich from Nov. 13-16. But buyers will have the choice of ordering a computer with the system or installing the device's software on their own computer. The system can run on Windows or Linux.

The system's hardware and software came from German researchers at the Fraunhofer Institute for Optronics, System Technologies and Image Exploitation IOSB, while the company TRIVISIO produced the actual eyewear.