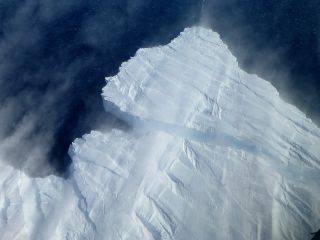 A nascent iceberg breaks off Pine Island Glacier's calving front. Icebergs in this area of the Amundsen Sea most often rise between 150 and 200 feet above the water surface. The image, taken from NASA's DC-8 on Nov. 4, 2012, also shows snow being blown by the mighty Antarctic katabatic winds.
(Image: © NASA/Maria-José Viñas)

The prominent rift in that opened up last in year in Antarctica's Pine Island Glacier has widened and filled with snow, according to a new NASA survey.

"This is what we expected to see since the area experiences strong winds that typically cause snow being redistributed on the surface," said Michael Studinger, project scientist for NASA's IceBridge mission. IceBridge is an ongoing survey of polar land and sea ice.

In a photo taken during a Nov. 4 survey flight, katabatic (downhill) winds blew snow across an iceberg at the glacier's calving front. Surface winds have been around 40 knots, or 46 mph (74 kph), Studinger told OurAmazingPlanet in an email interview.

A second rift has also formed and joined the northern side of the crack.

The Pine Island Glacier fissure was first spotted by IceBridge scientists last year, as they surveyed the giant ice shelf in a DC-8 airplane on Oct. 14, 2011. The glacier flows into the Amundsen Sea, where ocean water melts it from below. If the fracture severs Pine Island Glacier, the massive iceberg it creates would be the size of New York City.

Studinger said the ice surface at Pine Island Glacier changes by about 10 feet (a few meters) per year. "This is a significant change in terms of glacial dynamics, but too small to see with the bare eye," he said. The program's research plane is loaded with remote sensing equipment to provide a close-up view. Once this year's Antarctic IceBridge mission ends, researchers around the world will spend months analyzing data collected during the flights to track changes in the Antarctic ice, both at this glacier and elsewhere around the southernmost continent.

The 2012 Antarctic campaign has completed 14 science flights, one short of its 15-flight goal. "Weather permitting, we hope to be able to get 15 missions, maybe even 16 before we return to the U.S.," Studinger said.