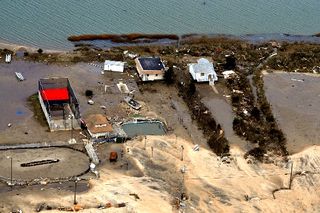 The flood that Hurricane Sandy sent over lower Manhattan and other parts of the region on Monday (Oct. 29) was one for the record books; it was the largest storm surge in New York City's history. But as unusual as this storm was, it may have offered a hint of the future in a warming world.

Boosted by a high tide, the water level at The Battery, at the southern tip of Manhattan, measured as high as 13.88 feet (4.2 meters) on Monday. The flooding there and in surrounding areas caused power outages, swamped roads and train tunnels, caused massive property damage and crippled the region for days and counting.

But, the identity of a severe storm aside, the devastating coastal flooding they bring to places such as New York City are expected to increase as the world warms.

By the end of the century, surge flooding at the 100-year level could occur at The Battery every three to 20 years, and a 500-year surge could happen every 25 to 240 years, the same team estimated in a study published in February in the journal Nature Climate Change. [Weirdo Weather: 7 Rare Weather Events]

Hurricane Sandy’s storm tide was comparable to that caused by a 1,000-year hurricane, Ning Lin, lead study researcher and assistant professor at Princeton, told LiveScience. However, she pointed out, Sandy was more than a hurricane.

"It is not something that will happen often, but it really gives us a lesson that New York is highly vulnerable," Lin said.

The city's location, which is positioned at the peak of the right angle made by Long Island and New Jersey, contributes to its vulnerability because storm winds travel counterclockwise and so push water in the direction of New York and New Jersey. However, Long Island, which juts to the east, blocks the path of the water, which must then travel through the group of islands that make up most of New York City.

Because the historical record for the region is brief, the team, led by Lin, then at MIT, used four climate models to compare the effects of simulated storms at the end of 20th century with those under conditions projected for the end of this century.

In the study, she and colleagues found that two factors contributed to the increase in surge flooding in the area: rising sea levels and changes in hurricanes. [Hurricanes from Above: See Nature's Biggest Storms]

The future of tropical cyclones, which include hurricanes, under climate change is not well-understood. Globally, these storms may become less frequent, although modeling studies suggest they may also become more intense. Projections vary depending on the ocean basin in question, according to a report on extreme weather issued by the Intergovernmental Panel on Climate Change earlier this year.

Lin and colleagues assumed sea level would rise by 3.3 feet (1 m) by the end of the century, at the middle of a range of projections. When both sea level and the future of severe storms were taken into account, the models projected much more frequent extreme surge flooding in the New York City area.

In a "hotspot" for rising sea levels

Recent work indicates sea-level rise may be a more pronounced issue along a 621-mile (1,000 kilometers) stretch of the U.S. Atlantic coast from Cape Hatteras, N.C., well north of New York City to the north of Boston.

In June, a separate group of researchers with the U.S. Geological Survey (USGS) reported in the journal Nature Climate Change that while the global increase in sea level between 1950 and 2009 averaged 0.02 inches (0.6 millimeters), sea level along this "hotspot"has increased on average 0.08 inches (2 mm) per year. The team attributes the difference to a change in ocean currents.

Regardless of what happens with storms in the future, this likely means more severe flooding for the region, say climate scientists.

"It's not like the winds have to get worse or the barometric pressure gets lower," said Asbury Sallenger, lead researcher for the "hotspot" study, and a USGS oceanographer. "As sea level rises, it adds on to the base of the storm surge."

Michael Oppenheimer, a Princeton climate scientist who contributed to the research on New York City's future flood surges, sees this aspect of the threat as a certainty.

"The thing I am quite sure about is sea-level rise," Oppenheimer said. "That will continue to add to storm surges like this."