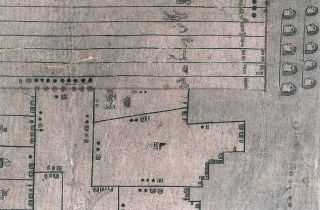 Drawn in 1540 by native Aztec painters, the Oztoticpac Lands Map depicts property dimensions of lands pertaining to commoners and nobility near Texcoco, the ancient capital of the Acolhua-Aztecs. Image courtesy of Library of Congress, Geography and Map Division

Aztecs used hand, heart and arrow symbols to represent fractional distances when calculating areas of land, scientists have discovered. The researchers pored over Aztec agricultural manuscripts trying to understand how the indigenous people arrived at area calculations. Only when they factored in the pictorial glyphs did the figures make sense.

The term Aztec refers to certain ethnic groups that were socially and politically dominant in Central Mexico in the 1300s through the early 1500s.

Geographer Barbara Williams of the University of Wisconsin, Rock County, and mathematician Maria del Carmen Jorge y Jorge of the Universidad Nacional Autónoma de México analyzed two documents that describe the agricultural properties owned by households in the city-state of Tepetlaoztoc from about 1540 to 1544.

"These are the only prehispanic documents that contain perimeter and area data, as far as I know," del Carmen Jorge y Jorge said. "Most of the documents from this time were lost."

The researchers tried to reproduce the area calculations and initially had trouble. When they realized that the arrow, hand, and heart drawings represented ground distances, they were finally able to arrive at the same calculations as the Aztecs.

"The system they use to record the areas is puzzling," del Carmen Jorge y Jorge told LiveScience. "We were very excited to see that actually using the [symbols] we were able to recover many of the areas."

Each symbol stood for a distance that was less than the standard distance unit, called a land rod.

"These arrow, heart, and hands were similar to what we would now call fractions," del Carmen Jorge y Jorge said. "We call them units of measure smaller than the length unit. Suppose if you have inches. An inch isn’t just part of a foot, but a measure unit itself. Think of these heart, hand, and arrow as individual units."

The scientists describe their findings in the April 4 issue of the journal Science. The research was supported by the Departamento de Matemáticas y Mecánica at Instituto de Investigaciones en Matemáticas Aplicadas y en Sistemas–UNAM.

The Aztecs had their own form of arithmetic. They used a base-20 number system, and designated ones with lines and 20s with dots. For example, 23 would be symbolized by one dot and three lines.

The land holding documents were originally written for tax purposes, the researchers think. The amount of money the indigenous people were asked to pay to the Spanish conquerors was most likely determined by how much property they had.

"The Spanish conqueror who was in charge of the town was asking a lot of tribute," del Carmen Jorge y Jorge said. "The Indians wanted to prove in Spanish court that they were not able to pay the tribute the Spanish were asking."

The type of mathematics the Aztecs used to calculate land holdings seems to be consistent with their calendar mathematics, which are more well-known, Williams said.

The ability to make calculations using proportions was widespread across cultures by that time.

"The Maya had this also," Williams said. "Also we see it in the counting of people and objects. This all fits in very nicely."