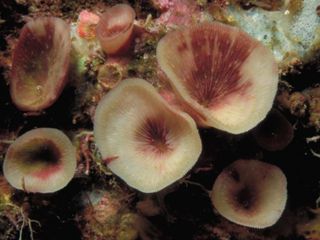 A specimen of Leptoseris troglodyta, the cave-dwelling coral, photographed near Indonesia in 2003.
(Image: © Bert Hoeksema )

A new species of coral has been discovered that clings to the ceilings of underwater caves in the western Pacific's Coral Triangle.

Able to tolerate low levels of light, the species lacks the symbiotic algae that most corals need to survive. The newfound species is related to deep-sea corals that survive in dark conditions below depths of 130 feet (40 meters), but so far, this species has been found no deeper than 115 feet (35 m), according to a description of the species published today (Oct. 11) in the journal ZooKeys.

The coral forms smaller polyps than its relatives and grows quite slowly, said study author Bert Hoeksema, a researcher at the Naturalis Biodiversity Center in Leiden, Netherlands, in a statement.

Its range overlaps with the Coral Triangle, a region that's well-known for its high diversity of marine organisms. The species has been dubbed Leptoseris troglodyta. The word "troglodyte" is derived from ancient Greek and means "cave dweller."

Investigations into how the coral is able to survive without symbiotic bacteria could shed light on the relationship between the two species. This relationship is critical; when water temperatures increase — as is happening in the world's oceans now — many corals may expel their algae, in a process known as coral bleaching. This often leads to the coral's death.