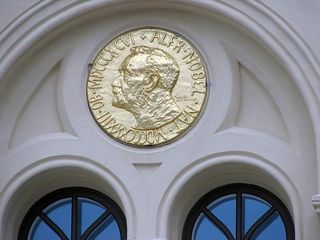 Every year since 1901, Nobel Foundation in Stockholm, Sweden, has awarded Nobel Prizes for achievements in physics, chemistry, physiology or medicine, literature and for peace. In 1968, Sveriges Riksbank established The Sveriges Riksbank Prize in Economic Sciences in Memory of Alfred Nobel, founder of the Nobel Prize. Each prize consists of a medal, personal diploma, and a cash award.
(Image: © Vladislav Gajic via Shutterstock)

The Nobel Prize confers significant prestige on its winners, but it also comes with a nice cash bonus.

This week the 2012 prizes are being announced in Stockholm, Sweden, and the awards will be presented there in December. Each prize includes a grant of 8 million Swedish kronor ($1.2 million); the prize used to be worth 10 millionkronor ($1.4 million), but was downsized this year because of the financial crisis.

Still, that's not pocket change for academics. While some make fantasy purchases (British biochemist Richard Roberts reportedly built himself a croquet lawn with his 1993 physiology or medicine prize money), many say they spent their Nobel awards on mundane needs like mortgages and college funds for their children.

"I didn't do anything special with the money; it just went into my savings," 2004 Nobel physics prizelaureate Frank Wilczek of MIT told LiveScience in an email.  "That cushion made it easier for me to feel comfortable augmenting my summer retreat in New Hampshire, where I've got some very good thinking done, as well as R+R."

Wilczek also noted, with tongue in cheek, that collecting the Nobel prize comes with its own costs.

"Although a lot is paid for, there can be some fairly serious expenses connected with Nobel week, especially if you use the occasion to buy lots of dress-up clothes for wife and daughters and self, to subsidize travel and accommodation for some guests, throw a nice dinner party or two in Stockholm," he said. [In Photos: Nobel Prize Winners 2012]

Plus, winners don't get to take home the entire $1.2 million prize purse. That total is split among the winners of each prize (there can be up to three). And furthermore, if the laureates live in the United States, the federal government takes about 40 percent of their cash in taxes.

Partly for that reason, physicist George Smoot of the University of California, Berkeley, elected to donate the money from his 2006 physics prize to a foundation that matched the funds to support scholarships and fellowships.

"This was effective as if I had taken the prize, the United States and California would have taxed away half of it," Smoot said. "This way much more funds went to young people in a way that may change their lives in a major way to the good."

Sometimes the achievement that earned the prize shapes how the proceeds get used. Smoot shared the 2006 Nobel Prize in physics with John Mather of NASA's Goddard Space Flight Center in Greenbelt, Md. The two were honored for their study of the cosmic microwave background radiation in space, a relic thought to be left over from the Big Bang, based on observations by NASA's COBE satellite.

"From my perspective the prize money didn't feel like my money, since the COBE mission was a NASA project funded by the citizens of the United States, so I wanted to do as much good as I could with it," Mather said. "And our team was very large (over 1,500 people) so it didn't seem feasible to share the money around among them in any kind of equitable fashion related to who did what."

Mather donated his portion of the winnings (as well the award for his 2006 Gruber Prize in Cosmology) to his John and Jane Mather Foundation for Science and the Arts, which supports dance, grad student fellowships, travel grants for NASA interns, and other projects.