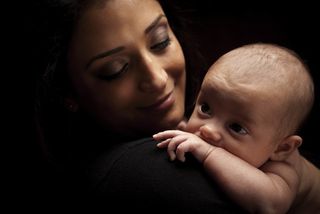 A mother's depression can extend the sensitive period in which babies learn their native tongue, while treatment with serotonin reuptake inhibitors (antidepressants) for moms or moms-to-be seems to accelerate the process, new research finds.

However, scientists aren't yet sure how either result influences babies' ultimate language development.

"The findings highlight the importance of environmental factors on infant development and put us in a better position to support not only optimal language development in children but also maternal well-being," study researcher Janet Werker, a psychologist at the University of British Columbia, said in a statement. Werker and her colleagues encouraged moms and moms-to-be with depression to seek treatment.

"It is really important that pregnant women discuss all treatment options with their physicians or midwives," study researcher Tim Oberlander, a professor of developmental pediatrics at the University of British Columbia, said in a statement.

Babies acquire language (and other life skills) in a series of sensitive periods. Infants are born able to discriminate sounds from any language, but already preferentially process the noises of their native tongue, the result of hearing it while in utero. By about 10 months, however, the ability to discern sounds not present in the child's native tongue begins to vanish. This sensitive period helps explain why people raised bilingual from an early age can sound like a native speaker in both languages, while people who learn a foreign language later will always struggle to lose their accents. [9 Incredibly Brainy Baby Abilities]

Certain medications can influence brain development and plasticity, the ability of the brain to adapt and rewire. According to Werker and her colleagues, between 15 percent and 20 percent of women experience depression during pregnancy, and as many as 13 percent of pregnant women are treated for depression with SRIs, or serotonin reuptake inhibitors (SRIs), a mood-stabilizing medication.

At 6 months and 10 months, the babies heard recordings of the English syllable "da" and the Hindi syllable "da." To a native English speaker, these sounds are virtually indistinguishable, but they are subtly different: Hindi speakers make their "da" sound by touching the tongue to their top teeth, while English speakers make their "da" by touching the tongue to the roof of the mouth behind the teeth.

In a second experiment, the same babies watched silent videos of people speaking either English or French. Normally, babies can tell the languages apart by mouth movements only until about 8 months of age.

In both cases, researchers determined if babies could tell the difference between the languages by playing one and then switching to the other. They then measured if the babies looked longer at the new sound or not. If they did, the researchers knew they could tell the difference. If they didn't, it was because the new stimulus seemed the same as the old, and thus didn't attract the babies' attention. [Photos: How Babies Learn]

The results revealed that kids of healthy, non-medication-taking moms could generally tell the languages apart at 6 months of age, but lost the ability at 10 months of age, as expected. But babies of moms with depression responded differently. When moms had received SRI treatment, the babies displayed unusual maturity in their discrimination patterns: They failed to discriminate between different languages at 6 months old.

A second experiment that involved playing vowels and consonants for fetuses of 36 weeks gestation found that the early maturation began even then. In fetuses of moms taking SRIs, recognition of native consonants was advanced. (Researchers measured recognition by tracking each fetus's heart rate.)

Likewise, babies of depressed moms showed changes from the norm. These babies seemed to have a longer-than-usual sensitive period of language development. They could still differentiate between different languages at 10 months of age.

In other words, SRI treatment seems to accelerate a baby's attention to their own language, while unmedicated depression seems to delay that attention. Researchers don't yet know whether this effect has any real-world consequences for how babies learn to speak.

"These findings once again remind us that poor mental health during pregnancy is a major public health issue for mothers and their infants," Oberlander said. "Non-treatment is never an option. While some infants might be at risk, others may benefit from mother's treatment with an antidepressant during their pregnancy. At this stage we are just not sure why some but not all infants are affected in the same way."

Depression in pregnancy has also been linked to childhood asthma and aggression, highlighting the need for treatment.

The researchers plan further studies with other types of antidepressants. They report their results today (Oct. 8) in the journal Proceedings of the National Academy of Sciences.