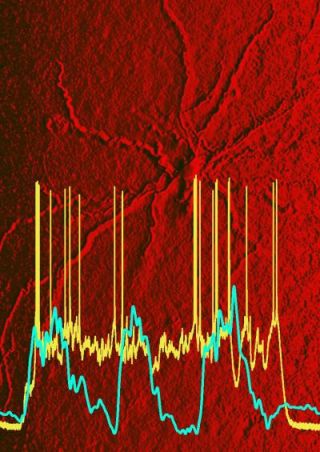 In the background is an entorhinal cortex neuron that was studied. The blue-green trace shows neocortical slow oscillation while the yellow trace shows the persistent activity of entorhinal cortical neuron, even when the inputs from neocortex were silent.
(Image: © Mayank Mehta)

While parts of the brain power down during sleep, other regions stay turned on, replaying the day's events and cementing memories.

Previous research suggested that this critical memory-making process depends on the hippocampus, sometimes called the old brain, communicating with the neocortex during sleep. But a new study shows the main interface between those two regions — the entorhinal cortex — also plays an important role in memory formation.

Mayank Mehta, a professor of neurophysics at UCLA, and his team examined these three brain regions in mice. They found that the entorhinal cortex showed what is called persistent activity even while under anesthesia. In humans, persistent activity is thought to mediate working memory while we're awake, such as when we concentrate on remembering directions or phone numbers. So the researchers were surprised to see such activity while the mice were knocked out and could not feel or smell or hear anything.

The researchers also found that the hippocampus was not driving this process, as had been previously assumed.

"This suggests that whatever is happening during sleep is not happening the way we thought it was," Mehta said in a statement. "There are more players involved so the dialogue is far more complex, and the direction of the communication is the opposite of what was thought."

New information about the role of the entorhinal cortex could be helpful to scientists studying Alzheimer's disease, which starts in that part of the brain, the researchers said. The study was published online Oct. 7 in the journal Nature Neuroscience.