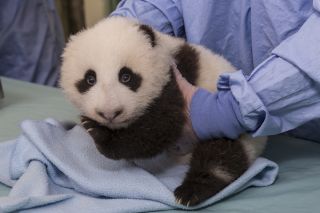 The San Diego Zoo's 9-week-old giant panda cub has completely opened his eyes and is now beginning to scope out the world around him.

Zoo veterinarians and keepers performed their weekly exam on the growing cub earlier this week, assessing his health and taking measurements. The cub (who will not be named until he is 100 days old, according to Chinese custom) weighed 6.6 pounds (2.99 kilograms), had a chest girth of 13.7 inches (35 centimeters) and an abdomen girth of 15.5 inches (39.5 cm). His growth is right on track with other cubs born at the zoo, according to a zoo statement.

The statement reported that the cub remained calm for most of the exam, though towards the end, he started to vocalize. As the cub grew louder, the team quickly concluded the exam so they could return him to mom Bai Yun.

The cub, born on July 29, is the sixth born at the zoo. All six have been born to Bai Yun. In addition to the cub and Bai Yun, the zoo has two other pandas, Gao Gao and Yun Zi. Yun Zi is also Bai Yun's cub; his name means "son of cloud."

The giant panda is considered endangered and is the rarest member of the bear family.