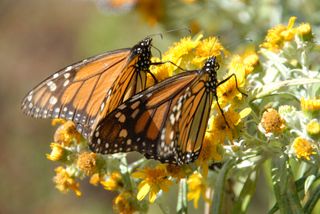 A pair of monarch butterflies seen in a still from the 3D movie "Flight of the Butterflies," which opens on Oct. 1, 2012.
(Image: © SK Films)

A new movie is bringing to theaters the tale of the discovery of monarch butterflies' astonishing migration — a journey that remained shrouded in mystery up until the 1970s.

Based on a true story, the 3D film "Flight of the Butterflies," which will show be shown at IMAX® theaters, chronicles the ground-breaking work of scientist Fred Urquhart, a man who spent many years trying to figure out where the iconic butterflies went during the cold winter months. They simply seemed to disappear.

Yet Urquhart's investigations — and his invention of the first butterfly-tracking tags — eventually uncovered a tale so strange it seemed more like fiction than fact.

It turns out that the dainty insects fly thousands of miles, from Mexico to the northern United States and Canada, and then back again, all over the course of about four generations.

Their story begins in a single swath of pine forest in central Mexico, where the butterflies spend the winter months clinging to the trees by the millions, barely moving, stuck in a sleepy torpor.

Come spring time, the monarchs begin to stir. They mate, and then begin to fly north. Over the course of several generations they travel through Texas, the Midwest, New England and still farther, until they alight on milkweed plants growing in the farthest reaches of their northward journey. This final generation of north-flying butterflies lays eggs, and then dies.

Then, the generation of butterflies born at these highest latitudes turns southward, and flies hundreds and hundreds of miles — retracing the paths of their parents, grandparents and great-grandparents — all the way back to that patch of Mexican fir forest.

It is still unknown how this long-lived "super-generation" of monarchs knows to make the long journey home to a land they've never seen.

Thanks to the immersive 3D Giant Screen environment, audiences can see intimate details of this astonishing journey. The film offers an up-close look at the metamorphosis from egg to pupa to caterpillar to butterfly, along with stunning footage captured in the butterfly forests of Mexico. [Video: See the movie trailer]

Although the film is an uplifting one, the story of the monarchs' struggle is tinctured with tragedy.

Monarch populations have faced significant declines over the last two decades, hit hard by a steep reduction in milkweed across North America. Milkweed is the only plant upon which the butterflies lay their eggs. Due to herbicide use and farming practices in the United States, milkweed has disappeared from some 140 million acres in the last 10 years.

Box-office money from the film will help fund butterfly conservation efforts, according to a statement from the production company.

The 3D, big-screen film "Flight of the Butterflies" opens in select theaters in the United States and Canada on Oct. 1, and will continue to roll out at additional theaters into 2013.

For more information on the film, visit www.flightofthebutterflies.com.