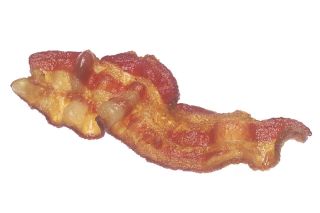 Experts at the National Pork Board say claims of an impending bacon shortage are exaggerated.
(Image: © Public domain (Renee Comet))

Can you imagine a world where there is no other white meat? If skyrocketing use of the term "aporkalypse" on Twitter is any indication, a recent statement from the United Kingdom's National Pig Association is causing some anxious consumers to do just that.

But is the trade group's claim that "a world shortage of pork and bacon next year is now unavoidable" really true?

"If you define a shortage as a situation where product cannot be found or where buyers must wait in lines to buy a product, the answer is no," Cindy Cunningham, a spokeswoman for the Des Moines, Iowa-based National Pork Board, told Life's Little Mysteries by email. "But the quantity of pork available to consumers in the U.S. and the rest of the world will decline in 2013, due to high feed costs and significant financial losses by producers."

The high feed prices are attributed partly to this year's widespread droughts, which have jacked up corn and soy prices and resulted in half of all U.S. counties being declared disaster areas. Some farmers have tried to cope by feeding candy to livestock.

Steve Meyer, a consulting economist to the National Pork Board (whose members are chosen by the U.S. secretary of agriculture), said U.S. pork consumers are likely to see price jumps next year as a result of this year's droughts, as the British trade group claims; however, he says the rise in prices will be slight, and he questions the group's "apocalyptic tone."

"There will be less pork, but that's happened before," Meyer told Life's Little Mysteries. "I'd be surprised worldwide if it's more than a 2 or 3 percent decrease on per-capita availability. That number hasn't changed that much in a long time."

Meyer notes that global availability of pork has for the most part been on a forward march in recent years. Consumption reached an all-time peak in 2010, at 33.4 pounds (15.1 kilograms) per person, before it decreased to 32.8 pounds (14.8 kg) per person in 2011, according to data from the U.S. Department of Agriculture's Foreign Agricultural Service. That figure is likely to bounce back slightly this year, to 32.94 pounds (14.9 kg), before the economic effects of the drought are fully felt by consumers, according to the USDA.

Assuming retail prices do start to reflect the decreasing availability of pork, Meyer says he'd be surprised if they topped $3.75 per pound, or about 25 cents higher than they are now.

"If we have good weather next year, I think costs will come down and they [pork producers] will be back in a profitable place at least by 2014," he said.

Still, the long-term prospects for current global pork consumption habits may not be good.

A recent report from the Stockholm International Water Institute found that in the year 2050, the Earth's water supply will be able to sustain the expected world population of 9 billion people only if humans are deriving just 5 percent of their calories from animal-based foods ― meat, eggs and dairy ― instead of the current proportion of 20 percent.