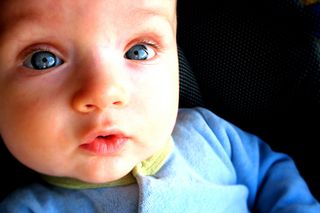 Where little ones as young as 6 months focus their gaze may indicate whether they have a neurological disorder such as autism, researchers say.
(Image: © sxc.hu, user maplec)

The eyes may be windows into the soul, but following their movement also could allow doctors to make quick, accurate diagnoses for disorders like autism, schizophrenia, or attention deficit hyperactivity disorder, various research projects suggest.

Eye tracking, which records where subjects focus when watching visual displays, could diagnose brain disorders more accurately than subjective questionnaires or medical examinations do, researchers say. Exams are expensive and time-consuming, and subjective tests have been known to wrongly identify healthy people or misdiagnose disorders.

To make sense of all that people see, the brain filters huge amounts of visual information, fills in gaps and focuses on certain objects. That complex task uses many mental circuits, so differences in what people choose to look at ― differences so subtle that only a computer can spot them ― could provide unprecedented insight into common neurological problems.

"Eye tracking is a great way to assess somebody's spontaneous attention and preference. That's really fundamental to who you are as a person," said Karen Pierce, a researcher at the University of California, San Diego, Autism School of Excellence. And because eye tracking requires only a camera, a laptop and a brief test, the technology could be easier to use than traditional diagnostic tools, Pierce said. [10 Things You Didn't Know About the Brain]

Pierce's team recently created a one-minute screening test to identify autism in high-risk kids. Toddlers watch two videos play simultaneously — one of people doing yoga, and another of moving geometric shapes. Typically developing children focus on people, while kids with autism, who suffer from social and language deficits tend to look more at the shapes, the researchers say. Right now the test identifies 40 percent of those with autism, but it doesn't wrongly flag toddlers who don't have the disorder, Pierce told LiveScience.

Meanwhile, Jennifer Wagner, a researcher at Children’s Hospital in Boston, is comparing the gaze patterns of low-risk children and siblings of those with autism, who have a 20 percent chance of developing the disorder.

Wagner's team studies babies between 6 months and 12 months old to try to detect autism sooner than the typical diagnoses, which are made around age 2. If a screening tool catches kids younger, when their neural connections are still changing rapidly, "maybe you can start retraining the brain before it gets solidified in a way that's maladaptive," Wagner said.

Some preliminary results suggest that at 9 months, high-risk babies' pupils dilate more when they look at emotional faces, suggesting they are more stimulated by the emotional content, she said.

Eye movement also could help doctors differentiate between fetal alcohol syndrome and attention deficit hyperactivity disorder (ADHD). Both diseases have similar symptoms, such as short attention span and hyperactivity, but the treatments are very different, said researcher Laurent Itti of the University of Southern California.

Itti and his colleagues recorded eye movements as patients with one or the other disease watched 20 minutes of television. The researchers then used machine learning, or an algorithm that learns without being given explicit instructions, to pick out the differences in gaze between the two groups.

Going into the project, the team said, it had no preconceived ideas about how each disorder would affect gaze.

Its machine-learning model accurately distinguished ADHD patients from those with fetal alcohol syndrome 77 percent of the time, according to a paper published online Aug. 25 in the Journal of Neurology. [Typical Toddler or ADHD: 10 Ways to Tell]

"There is a complex pattern of fairly subtle differences between the patients," Itti said.  Children with fetal alcohol syndrome and ADHD focused on object orientation and edges differently, he said. The difference was imperceptible to humans, but the computational model detected it. The researchers don't know how these differences in gaze tie to underlying mental processes, but they think many brain disorders could cause subtle differences in eye movements that only a computer could detect.

Eye tracking can accurately screen for neurological disorders partly because of the sheer amount of data it provides, Itti said.

"Every picture contains a million different pixels and we send that data at 30 pictures per second. And the eye movement contains a lot of information. You move your eyes more often than you beat your heart," he said.

The technology also could identify schizophrenia. When asked to visually follow a moving object in a task called the smooth pursuit test, schizophrenics have trouble keeping their eyes on the target and constantly have to play catch-up. In a paper published May 21 in the journal Biological Psychiatry, researchers used eye tracking and such visual tests to distinguish with 98 percent accuracy between schizophrenics and healthy controls.

In theory, knowing where people focus their attention could help diagnose several other neurological problems, Itti said. "If I record your eye movements as you watch TV for 10 minutes, there is a lot I can learn about you."