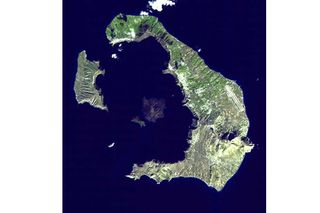 One of the largest volcanic eruptions in the past 10,000 years occurred in approximately 1620 BC on the volcanic island of Santorini in the Aegean Sea. Following the 1620 BC eruption, much of the previous island of Santorini was destroyed or submerged; this event may have been the inspiration for the legend of the lost continent of Atlantis.
(Image: © NASA/GSFC/METI/ERSDAC/JAROS, and U.S./Japan ASTER Science Team)

Molten rock is pooling beneath Greece's Santorini volcano, the site of one of the largest eruptions in the past 10,000 years. That eruption, which took place about 3,600 years ago, wiped out the Minoan civilization of the Greek islands and may have spawned the legend of the lost city of Atlantis.

In the past 1.5 years, the magma chamber beneath the volcanic island has ballooned by as much as 350 million cubic feet (20 million cubic meters), or up to 15 times the size of London's Olympic Stadium. This giant mass of magma has caused the island to rise by as much as 5.5 inches (14 centimeters), according to a new study published yesterday (Sept. 9) in the journal Nature Geoscience.

This research follows reports earlier in the year of renewed earthquake activity beneath the volcano after it had been silent for the past 25 years. The reports have spurred concerns the volcano could erupt in the near future, but when that might happen is still unclear, researchers said in a statement.

"Before this work, we didn't really know how the volcano behaved during the periods of time between eruptions," David Pyle, an Oxford University researcher and study co-author, told OurAmazingPlanet. "Now, it looks as though the magma chambers beneath volcanoes like Santorini grow in spurts."

When the volcano erupted in approximately 1620 B.C., it created tsunamis 40 feet (12 meters) tall that destroyed much of the civilization flourishing in and around the Aegean Sea. Much of the previous island of Santorini was destroyed or submerged.From the air, the resulting caldera, or volcanic crater, appears as a small cluster within the bigger collection of Greek islands in the Aegean Sea.

Earlier this year, global positioning system (GPS) sensors placed on the caldera detected renewed movement, measuring a series of small earthquakes. Seismic activity can trigger eruptions and are often a clue that a volcano may be preparing an outburst in the near future. But the connection is far from well-understood; and in the past few months, seismic activity has dropped off once again, according to the statement.

If the volcano did erupt, it wouldn't be likely to create nearly as much havoc is it did in the time of the Minoans, since it is much smaller today than it was in the past. But it's still important to keep an eye on the volcano, the researchers warn.  [History's 10 Biggest Eruptions]

"Although Santorini is well known for its large explosive eruptions, these probably only happen every 20,000 years or so," Pyle said.

There has been much speculation as to whether the Santorini eruption inspired the legend of Atlantis, which Plato said drowned in the ocean. Although someexperts think the legend of Atlantis was just invented, others say the explosion might have given rise to the tale of a lost empire by helping to wipe out the real-life Minoan civilization that once thrived in the Mediterranean.