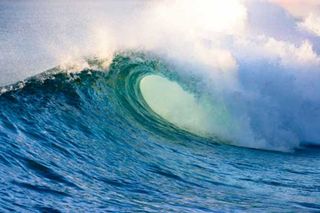 Like sound or light waves, tsunamis have a wavelength, crests and troughs that could be cancelled out to effectively cloak, say, an oil rig and protect it from the waves, based on new technology. But practically pulling such complex cloaking off will require a lot more research.
(Image: © Stockxpert)

The volcanic explosion that obliterated much of the island that might have inspired the legend of Atlantis apparently triggered a tsunami that traveled hundreds of miles to reach as far as present-day Israel, scientists now suggest.

The new findings about this past tsunami could shed light on the destructive potential of future disasters, researchers added.

The islands that make up the small circular archipelago of Santorini, roughly 120 miles (200 km) southeast of Greece, are what remain of what once was a single island, before one of the largest volcanic eruptions in human antiquity shattered it in the Bronze Age some time between 1630 B.C. to 1550 B.C.

Speculation has abounded as to whether the Santorini eruption inspired the legend of Atlantis, which Plato said drowned in the ocean. Although the isle is often regarded as just an invention, the explosion might have given rise to the story of a lost empire by helping to wipe out the real-life Minoan civilization that once dominated the Mediterranean, from which the myth of the bull-headed 'minotaur' comes.

The primary means by which the eruption potentially wreaked havoc on the Minoan civilization is by the giant tsunami it would have triggered. However, the precise effects of this eruption and killer wave have been a mystery for decades.

Now scientists find the tsunami may have been powerful enough to race some 600 miles (1,000 km) from Santorini to reach the farthest eastern shores of the Mediterranean, leaving behind a layer of debris more than a foot thick by the coast of Israel.

Researchers dove as far as 65 feet deep (20 meters) off the coast of Caesarea in Israel to collect tubes of sediment, or cores, more than 6 feet long (2 meters) from the seabed.

"The work resembles a construction site with pneumatic hammers, heavy weights, floats to counter-weight equipment, hoses — Each time we took the system down it took hours of surface preparation, planning, and discussion," said researcher Beverly Goodman, a marine geoarchaeologist at Interuniversity Institute for Marine Sciences at Eilat, Israel.

Within the cores, they found evidence of up to nearly 16 inches of sediment deposited roughly about the date of the Santorini eruption. The range of sizes of the particles making up this deposit is the kind one might find laid down by a tsunami — storms, in comparison, cannot kick up the seafloor as much, and as such the range of particle sizes they generate is more limited.

The discovery was very much an accident, Goodman noted. They were actually researching the demise of the harbor of ancient Caesarea, the cause of which remains hotly debated, with culprits including earthquakes and tsunamis.

"I was testing how two later Roman and Byzantine tsunami deposits could be characterized by studying the different grain sizes — various sand, pebbles, rocks, ceramic pieces — in the deposit.  Based on determining this 'signature,' I then noticed that there were more than the expected number of tsunami deposits," she explained. "I had no expectation that remnants of the Santorini event would be present in the cores."

These findings support the idea that the Santorini eruption and the side effects from it, such as the tsunami, were massive.

"In the case of the eastern Mediterranean, there seems to be a surprising dearth of archaeological sites along the coastline following the Santorini eruption event," Goodman said. Either archaeologists have failed to concentrate on this time span, "which isn't the case," she said, or the tsunami had a very real impact on coastal settlements.

The dramatic changes in life triggered by the tsunami "might have been part of the fabric of the Atlantis story," Goodman added. "The network of sea-based trade was rather sophisticated in that period, and colonies that were nearly solely dependent on those trade routes existed. It is hard to imagine that such a far-reaching disaster didn't cause them severe shortages in supplies, wealth and power."

Although Atlantis itself "is a myth and legend, it is informative about the experiences of the ancients," Goodman said. "It may very well be the case that those passing the story on had heard of or witnessed events in which coastal buildings went underwater because of earthquakes; beachfront towns were flooded during tsunamis; islands were created by underwater volcanic activity. There may be that grain of truth that lent legitimacy and a certain reality to the legend of Atlantis."

To better reconstruct the Santorini tsunami, the scientists plan to analyze deposits closer to the eruption, such as on Crete and in western parts of Turkey. Knowing the potential effect of tsunamis could be critical for the coastal planning and management, Goodman said, adding that the eastern Mediterranean is very highly populated and possesses considerable sensitive infrastructure such as power stations.

"I suppose there is always the question of whether I think another tsunami will occur in the eastern Med," Goodman said. "The answer is yes.  I actually checked the elevation of the house I am moving to near Caesarea before agreeing to move there."

Goodman and her colleagues detailed their findings in the October issue of the journal Geology.