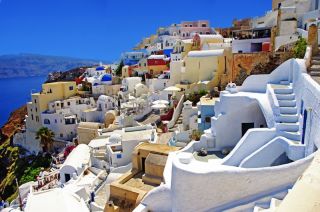 The volcanic caldera on the picturesque tourist island of Santorini is showing signs of unrest. But researchers detecting the caldera's movement say it doesn't necessarily mean an eruption is imminent.

The Greek island was the site of one of the most massive volcanic eruptions in history 3,600 years ago. That eruption, which created tsunamis 40 feet (12 meters) tall, may have spawned the legend of the lost city of Atlantis. The volcano last erupted in 1950, albeit on a much smaller scale.

Global positioning system (GPS) sensors placed on the caldera have detected renewed movement after decades of peace. The earth around the caldera (a depression at the top of a volcano) is deforming, or expanding outward, researchers report in an upcoming article in the journal Geophysical Research Letters. GPS instruments on the northern part of Santorini have moved between 1.9 and 3.5 inches (5 to 9 centimeters) since January 2011, said study researcher Andrew Newman, a geophysicist at Georgia Tech in Atlanta.

In the same time period, the magma chamber under Santorini has swollen by almost 500 million cubic feet (14 million cubic meters).

Newman and his colleagues say it's unlikely that the deforming caldera portends an eruption. Excavations of extinct volcanoes suggest that 90 percent of the time, belowground magma movements don't end in eruption. A similar caldera system, the Long Valley Caldera in California, started deforming in 1980, Newman said. It then quieted again until 1989, repeating the cycle in 1997 and 2002, with nary an eruption.

If a Santorini eruption did occur, Newman said, it would be nothing like the Minoan eruption of 1650 B.C. that birthed the myth of Atlantis. That eruption was a once-in-100,000-year event, and the expansion of the magma chamber happening now is only 1 percent of what would have gone on prior to the ancient blast. [The 10 Biggest Eruptions in History]

Geophysicists are keeping an eye on the caldera, however. An eruption could generate local tsunamis within the Santorini archipelago, Newman said, damaging ports and disrupting ship traffic. Even if the volcano doesn't erupt, the shifting caldera could increase earthquake risk, and the island cliffs are vulnerable.

"We don't need an eruption to have earthquake-induced landslides," Newman said.

There's no telling how long the deformation will continue, but it could stretch years or decades, perhaps cycling between activity and peace, Newman said. While no reason to be alarmed, the restless caldera is important for scientific study, he added.

"It is one of very few of these really large caldera volcanoes," he said. "So any information we gather from ongoing activity adds significantly to our database of how these systems evolve."