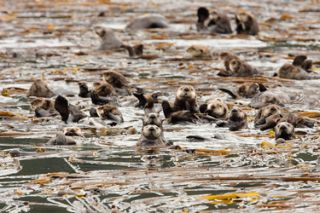 Sea otters might be on the frontlines of the fight against global warming, according to a new study showing the fur-coated swimmers keep sea urchin populations in check, which in turn allows carbon dioxide-sucking kelp forests to prosper.

Researchers from the University of California, Santa Cruz, looked at 40 years of data on otters and kelp blooms from Vancouver Island to the western edge of Alaska's Aleutian Islands. They said they found that sea otters have a positive indirect effect on kelp biomass by preying on sea urchins.

Sea urchins greedily graze on kelp when otters are not around, but in the presence of the predators, urchins hide in crevices and eat just the plant scraps. More otters mean more kelp and since the plant is particularly good at capturing carbon through photosynthesis, this also could mean less CO2 in the atmosphere. (During photosynthesis, plants like kelp absorb carbon dioxide, which along with water and energy from the sun, they use to convert it to organic matter.

The study, published Friday (Sept. 7) in Frontiers in Ecology and the Environment, found kelp forests can absorb 12 times more carbon dioxide with otters around than if the plant were subject to sea urchins.

The authors acknowledge that otters probably aren't the answer to rising CO2 levels, a major contributing factor to global warming, but the researchers say their study illustrates the impact animals can have on the atmosphere.

"Right now, all the climate change models and proposed methods of sequestering carbon ignore animals. But animals the world over, working in different ways to influence the carbon cycle, might actually have a large impact," UC Santa Cruz professor Chris Wilmers, a co-author of the study, said in a statement. "If ecologists can get a better handle on what these impacts are, there might be opportunities for win-win conservation scenarios, whereby animal species are protected or enhanced, and carbon gets sequestered."

The research was funded by the National Science Foundation and the National Oceanic and Atmospheric Administration.