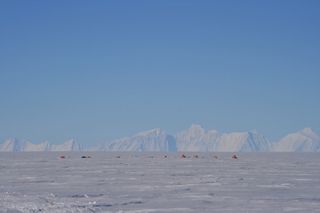 Lake Ellsworth, on the West Antarctic Ice Sheet, is one of 387 known subglacial lakes in Antarctica. The Ellsworth Mountains are shown in the background behind the field site.
(Image: © Neil Ross/University of Edinburgh)

Scientists will have just 24 hours to conduct an experiment 16 years in the making if all goes well in Antarctica.

In October, a team of U.K. scientists will complete the journey to find life in one of the least likely places: a lake buried beneath nearly 2 miles (3 kilometers) of ice on the frozen continent.

The team is expected to start drilling into the ice atop Lake Ellsworth by December.

A separate expedition will start in October as U.S. scientists look for life under another system of lakes and rivers underneath the ice in western Antarctica.

The two forthcoming ventures will join a third, the Russian Antarctic Expedition that in February successfully drilled into Lake Vostok, Antarctica's largest subglacial lake, larger than Connecticut, under nearly 2.5 miles (4 km) of ice.

"It's a basic curiosity-driven question," said Martin Siegert, a glaciologist at the University of Bristol and principal investigator on the U.K. effort. “Wherever we find water on planet Earth, we always find life and there might be a relationship between life and water.”

The extreme explorations will be a test to determine if water correlates with life, even under extreme pressure, cold and nutrient deficiencies.

If the group does not identify life, Siegert said the experiment would provide a major finding for the scientific community. [Stunning Photos of Antarctica's Lake Ellsworth]

"If uninhabitable, that might assist our appreciation of the likelihood of life on extraterrestrial planets," Siegert said.

Once engineers on the British team drill down to the lake, the researchers will have only 24 hours to sample the water, untouched for hundreds of thousands of years, before the borehole refreezes and reseals the lake.

"Life's going to be quite difficult," said Chris Hill, British Antarctic Survey program manager who will be joining the 12-member team. The researchers will camp out in the desolate region where, even though it will be summer, the temperature will average minus 13 degrees Fahrenheit (minus 25 degrees Celsius) and the wind will whip up to speeds of 29 miles per hour (25 knots). "It's not a very pleasant place to live and work," Hill said.

The challenges to the U.K. project will be great. Already 100 tons of equipment have been sent from the U.K. to the middle of Antarctica.

However, all the equipment pushed into new technological frontiers, much like the Mars Curiosity.

"There's a huge risk there because everything is done from scratch and will be used in an extreme environment," Hill said. "The main thing to remember when you work in Antarctica, everything takes at least three times longer than in the U.K.," said Hill, who has been to the desolate continent 15 times over the course of as many years.

Even if microbial life or signs of life are found, there still exists the possibility that researchers are capturing living fossils trapped in once-exposed lakes that over time became closed ecosystems instead of an active ecosystem alive beneath the ice.

But there are precedents that the most extreme of extreme environments are still hospitable for life.

"What has been found in Antarctic lakes so far are typically close relatives of bacteria found in aqueous water that have evolved mechanisms to grow in the cold," he said. [Extreme Life on Earth: 8 Bizarre Creatures]

Madigan and colleagues found sulfate-eating life in Lake Fryxell, which is covered in 10 to 16 feet (3 to 5 meters) of ice.

In November and December of 2011, Madigan collected snow and ice samples around the South Pole and is currently trying to find out if he can enrich any life in below-freezing conditions.

"There might be super cold-loving bacteria that may be missed," Madigan said. "Organisms that grow in these conditions would grow slowly, so it won't be a quick story."

"What you need for microbial life is not just water, microbial ecosystems are analogous to the engine in your car, they need a source of energy," said Brent Christner, a professor at Louisiana State University, who is one of 13 investigators on the WISSARD (Whillans Ice Stream Subglacial Access Research Drilling) project.

That energy could come from bedrock. As glaciers move, they pulverize the bedrock beneath and liberate minerals that microbes can use as an energy source.

The American team will examine a complex series of lakes and rivers called Lake Whillans and the Whillans Ice Stream beneath a thick coat of ice that drains into the ocean.

Based on previous findings in the area, "[w]e expect to find a microbial system on the sediment surface that makes a living in the dark by fixing carbon dioxide and mining rocks from energy minerals," said John Priscu, a Montana State University and investigator with the WISSARD project.

Any microbes the group finds will beg the questions: Where did they originate? Incidental ocean backflow or an actual ecosystem?

The researchers said this would be a tough question to address. The time scales will help in the interpretation: cold-loving microbes double on a weekly scale compared with the decade-long water cycle.

Another clue as to whether the group has found an exotic ecosystem will be to find changes in the chemical composition, indicative that microbes are eating and producing waste materials.

One promising result came from a core sample from Kamb Ice Stream in western Antarctica that contained abundant microbes. However, that core sample may have been compromised since it was stored for over a year at 39 F (4 degrees C) instead of at freezing or below freezing temperatures.

Back in his office, Siegert, of the U.K. team, contemplated the 24-hour window in which he put 16 years of research and planning.

"We're quite relaxed, we've been working up against some hard deadlines," Siegert said. "Sixteen years is a long time to plan an experiment, but we will be well rehearsed."