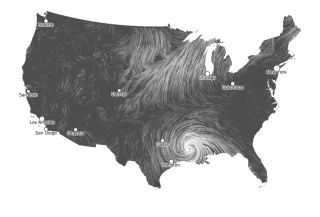 You can't exactly see the wind. Until now. Two data-visualization experts have made a stunning map that shows the speed and directions of winds around the country, including the ferocious ones spawned by Isaac.

In a screenshot from the site this morning (Aug. 30), Tropical Storm Isaac can be seen churning its way northwest of New Orleans. The map helps show how big and powerful the storm still is, lashing the area with winds of up to 40 mph (65 kph) and dropping a prodigious amount of rain.

The map was created by Fernanda Viégas and Martin Wattenberg, artists/technologists who lead Google's "Big Picture" visualization research group in Cambridge, Mass., according to their website.

Faster winds are shown as thicker white lines, and the speed of the wind can be determined by zooming in and clicking on individual gusts. The map was created by taking surface wind speeds from the National Digital Forecast Database, which is updated once per hour.

"So what you're seeing is a living portrait," the duo write on their site.

A second image shows wind speeds just after Isaac made landfall yesterday (Aug. 29), with gusts up to 70 mph (113 kph), denoted in brown. The effect of land on hurricane intensity is clearly visible in this image: Wind speeds decline as storms move ashore. That's due to the protective effect of Louisiana's marshes, which can help slow surface winds, according to the National Oceanographic and Atmospheric Administration.