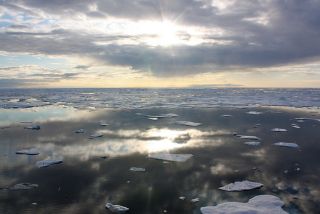 "It used to be the Arctic ice cover was like a big block of ice," said Walt Meier, a research scientist with the U.S. National Snow and Ice Data Center (NSIDC) during a press conference held after the new record low was set on Sunday (Aug. 26). "Now it's become crushed ice and that is a lot easier to melt and melt more quickly. Parts of the Arctic have become like a giant slushie. [That] makes them more vulnerable to these types of storms."

The storm persisted over the central Arctic Ocean for several days, bringing warm and very windy conditions to the Chukchi and East Siberian Seas, followed by low temperatures. Strong wind and wave action from storms like this can increase melt by breaking up ice, according to a NSIDC report following the storm.

Sea-ice watchers saw this coming, at least to some degree.

"As early as maybe July we were able to project that the 2012 ice cover will likely be similar to 2007, but then in August, when we have this storm, the values for 2012 started to go down lower," said Josefino Comiso, a sea ice researcher with NASA.

Sea-ice extent describes the area of ocean covered at least 15 percent by sea ice as measured by satellite instruments. Continuous satellite measurements of sea-ice extent date back to the late 1970s.

Sea-ice extent grows and retreats with the season every year. While there are significant fluctuations in this cycle from year to year, by the late 1990s satellite measurements indicated there was a strong downward trend in sea-ice extent, said Claire Parkinson a climatologist at NASA's Goddard Space Flight Center in Greenbelt, Md.

By the end of the 1990s, submarine data showed the ice was thinning as well, Parkinson said.

The old ice, which survives year after year and maintains thicknesses of 10 to 12 feet (3 to 3.6 meters), has been disappearing from the Arctic waters, Meier said. Now, Arctic sea ice has become thinner and is more easily melted or pushed around by storms, he said. "The Arctic Ocean is really a different place than it used to be," he said.

The loss of Arctic sea ice has serious implications for the animals — polar bears and walruses — that use it as habitat.

"Now your AC is losing its coolant so to speak," Meier said.

The cool, white cap over the Arctic plays a role in weather patterns, such as the high-altitude westerly winds of the jet stream. While it is too early to make a strong connection between changes in sea-ice cover and changes in weather, they would certainly be plausible, he said.

The light color of sea ice is responsible reflecting most of the sun's energy that strikes it back out to space. But if the ice melts, the dark water it has exposed absorbs most of the energy, which in turn enters the natural system. This dynamic was probably at work this summer, because rapid melt exposed an unusual amount of water, which in turn stored more of the sun's energy, Meier said.

Sea ice typically reaches its annual minimum by the third week in September, so the extent is expected to continue receding for sometime, although it's not clear how far it will go, the scientists said.

While scientists believe that the Arctic is heading toward nearly ice-free summers, it's not clear when those will arrive. Natural variability means the declines could see lulls and spikes, and scientists aren't certain how the unusual melt in 2007 and 2012 fit into this path, Meier said.

"How much is the long-term trend and how much is due to natural variation that we may plateau from or rebound from in the future," he said.