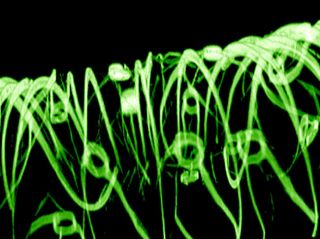 Tiny wires embedded in living tissue could help build a lab-grown human heart. Researchers have taken a step toward that future by growing cardiac, neural and muscle tissue on specially engineered 3D scaffolding containing the wires.

The silicon nanowires have a size 1,000 times smaller than a human hair and can detect the extremely low voltage of living cells — less than one-thousandth of a watt — according to MIT News. Such tiny wires could monitor the electrical activity in human tissue, check on how drugs affect beating heart tissue, or even someday control the timing of drug dosages.

"It brings us one step closer to someday creating a tissue-engineered heart, and it shows how novel nanomaterials can play a role in this field," said Robert Langer, a chemical engineer at MIT.

Past biological scaffolding relied upon cruder methods of layering cells on top of metal electrodes and transistors. The new 3D scaffold is a spongy structure that not only encourages the growth of cells, but also promotes cell network communication through the embedded nanowires.

Langer's team from MIT, Harvard University and Boston Children's Hospital described how they turned the wires into electronic sensors for living tissue in yesterday's Aug. 26 issue of the journal Nature Materials.

"The scaffold is not just a mechanical support for cells, it contains multiple sensors," said Bozhi Tian, a former postdoctoral researcher at MIT and Children's Hospital and a leader author on the paper. "We seed cells into the scaffold and eventually it becomes a 3D-engineered tissue."

Both the nanowires and epoxy scaffolding represent stable, nontoxic materials. That could allow researchers to safely implant such materials in human patients someday, but they first plan to test the materials in animals.

The scaffold could also act as a lab on a chip for screening the effects of drugs outside the body.