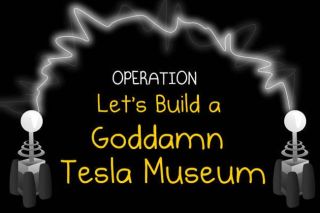 The main image for an Internet fundraiser aimed at buying the land where Nikola Tesla's lab once stood.
(Image: © Matthew Inman)

Wardenclyffe Tower once stood as a testament to inventor Nikola Tesla's dream of beaming wireless power around the world. The land where the tower once stood is now up for sale in Long Island, N.Y., but a nonprofit has already raised hundreds of thousands of dollars overnight toward its goal of buying the former site of Tesla's grand experiment.

Tesla stood alongside Thomas Edison as a scientific "wizard" of his era — an inventor who laid the foundations for the modern power grid even as he dabbled in science fiction visions such as particle beam weapons and wireless power stations. His life ended in financial ruin and isolation, but he has enjoyed post-mortem popularity in pop culture and among scientists, engineers and fellow geeks because of his status as an unsung American inventor and technological visionary.

Such geek popularity helps explain how the fundraising project on the website Indiegogo raised more than $400,000 during the first 20 hours — about half the funding needed to hit the goal of $850,000 and trigger a matching grant contribution from New York State. All the funding is designated for the Tesla Science Center at Wardenclyffe, a nonprofit organization, to purchase the Wardenclyffe land for $1.6 million and preserve it for a future Tesla museum.

(Only funding left over from buying the land would go toward building the museum, which will likely require additional funding sources.)

Wardenclyffe represented the culmination of Tesla's grand plan to conduct electricity across huge distances through the Earth — an idea that proved scientifically flawed in its original conception. But the death blow to the project came after J.P. Morgan, famed financier and backer for the project, withdrew his support. Funding from other investors also dried up, and the U.S. military eventually demolished the tower during World War I.

Much credit for the swift fundraising also goes to Matthew Inman, creator of the online comic website "The Oatmeal," who helped organize the fundraising effort, as well as Internet users on the popular social news website Reddit.

Inman previously drew a comic that lionized Tesla and belittled Edison as a money-grubbing businessman who simply profited from other inventors' ideas. The comic also emphasized the idea of a rivalry between Tesla and Edison based in large part upon the "War of Currents" in the 1880s that saw Tesla's alternating current (AC) system win over Edison's direct current (DC) system.

But past mudslinging has not stopped Inman from holding out an olive branch to General Electric (GE), the corporate giant founded by Edison, as a possible corporate sponsor to help buy the Wardenclyffe land and possibly build the museum.

"Sponsor this museum!" Inman told GE in his comic. "The Internet will love you forever, I promise."

"One hundred years ago you believed in Tesla and backed him financially," Inman wrote. "Honor his legacy and help him out again!"