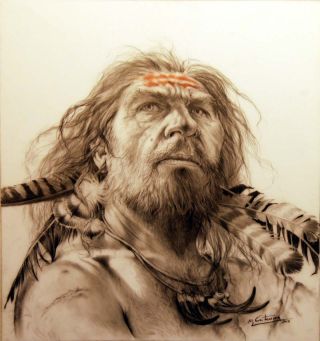 An artist's depiction of a Neanderthal decorated with feathers.
(Image: © Credit: Mauro Cutrona. )

There has been a long-standing debate over whether humans had sex with Neanderthals and recent studies have pointed to shared genes as evidence of such interspecies dalliances.

But new research claims that common ancestry, not interbreeding, better explains why people of European and Asian descent share 1 to 4 percent of their DNA with Neanderthals. Some of us may not be part caveman after all.

The new version of events, as told by scientists at the University of Cambridge, looks like this: Neanderthals and modern humans once shared a common ancestor who is thought to have lived across Africa and Europe about half a million years ago. But then 350,000 to 300,000 years ago, the European range and the African range of this ancestral species became separated. The European range evolved into Neanderthals, while the African range became modern humans.

Modern humans in northern Africa (closer to Europe) would have retained more of the ancestral DNA that is shared with Neanderthals than their cousins further south in Africa. When these modern humans expanded out of Africa into Europe and Asia about 60,000 to 70,000 years ago, they would have brought with them those ancestral traits shared with Neanderthals, the researchers say.

In other words, the humans who came to live alongside Neanderthals would have already had some cavemanlike DNA.

The research, which appears in the journal Proceedings of the National Academy of Sciences, is based on models of common ancestry and geographic differences among populations within each continent.

"Our work shows clearly that the patterns currently seen in the Neanderthal genome are not exceptional, and are in line with our expectations of what we would see without hybridisation (interbreeding)," lead researcher Andrea Manica said in a statement from Cambridge. "So, if any hybridisation happened — it's difficult to conclusively prove it never happened — then it would have been minimal and much less than what people are claiming now."

A study last year found that even if humans and Neanderthals did have sex, those encounters were rarely successful in producing offspring. Using a computer model to estimate how much Neanderthal ancestry would be present in modern humans based on different levels of interbreeding, the researchers discovered the success rate was probably less than 2 percent in most cases.