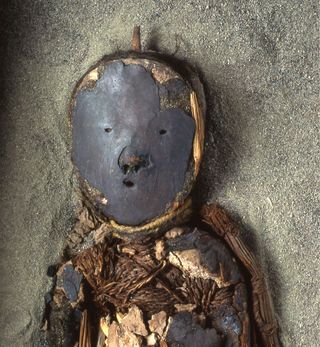 A so-called black mummy created by the ancient South American Chinchorro people. Mummies like these were made between 7,000 and 4,800 years ago.
(Image: © Courtesy of Bernardo Arriaza)

Some Chinchorro mummies are covered in black paint and wear simple face masks and wigs of human hair; others are painted red, with more lifelike faces and bodies filled with earth, feathers and clay. Still others are wrapped in coiled vegetable fiber, and others covered in mud, but otherwise left alone.

Nature inspired all of these, according to researchers, who point to the bone-dry land upon which the Chinchorro lived. South America's Atacama Desert is one of the driest in the world, and bodies don't naturally decompose there.

But it wasn't just the desert; climate helped create these elaborate mummies in other ways. Periods of greater rainfall on the margins of the desert and in the nearby highlands of the Andes Mountains, and a more productive ocean nearby, prompted a growth in population that peaked about 6,000 years ago, they write in a study published online Monday (Aug. 13) in the journal Proceedings of the National Academy of Sciences.

When the dead stick around

A growing population meant the dead multiplied as well.

"They became a strong presence for the living population, and they would have a strong impact on the living," lead researcher Pablo Marquet, of the Catholic University of Chile and the Santa Fe Institute in New Mexico, told LiveScience.

He and colleagues write that at about the time the first man-made mummies appeared — the black-painted ones, dating between 7,000 and 8,000 years ago — a typical Chinchorro individual could potentially be exposed to a "population" of several thousand natural human mummies.

"The lack of decomposition may have had a profound influence upon the living population, because the dead would have still been among them, albeit in a different state of existence," they write.

The Chinchorro, who were hunter-gatherers, buried their dead in shallow graves near domestic areas and water sources. [10 Weird Ways We Deal With the Dead]

Marquet and his colleagues compared the estimated size of the human population over time with records that provided evidence of climate around the time in which the Chinchorro were making mummies.

With data dating back about 14,000 years, they looked at piles of debris left by rodents, geological records of freshwater bodies, as well as chemical measurements from ice cores taken from the summit of the Bolivian volcano Sajama. They estimated the human population using radiocarbon dates taken from remains.

The results indicated artificial mummification emerged when resources, particularly fresh water, were more plentiful, and the human population was rapidly increasing. A larger population fosters the creation of new tools and new ideas, and in this case, probably led to the development of elaborate funerary practices, they write.  [Photos: Incan Child Mummies]

The Chinchorro made the black mummies, the first artificial mummies, from corpses by removing the organs, cleaning the skeletons and reinforcing the bones with sticks. They then reshaped the body and dressed it with the person's own skin or with the skin from an animal. The head was covered with a simple face mask and a wig of human hair, and then the entire body was painted with manganese oxide, which made it appear black, according to a description on study researcher Bernardo Arriaza's website.

Other types came later. These included red mummies. The Chinchorro made incisions in the abdomen, shoulder, groin and ankles to remove organs and muscle tissue. The bones were also reinforced and the body cavities dried and filled with earth, feathers and clay. The head received a long wig and a mask with delineated features. The rest of the body was painted red, Arriaza's website, Momias Chinchorro, states.

Others were prepared in a similar fashion but wrapped in coils of vegetable fiber. Still other corpses were left unaltered except for being covered by a layer of mud.

Around 4,000 years ago, the region became much drier and coastal waters became less productive, at about this time the Chinchorro stopped making artificial mummies, the researchers write. They probably moved inland to the highlands of the Andes, according to Marquet.