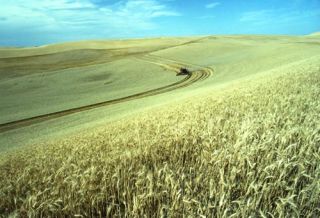 The smell of freshly cut grass, though often pleasant to humans, is actually a plant's way of letting out a cry for help.

When plants are under attack from lawnmowers, they release chemicals called green leaf volatiles to signal that there's trouble. They do the same when besieged by pests or disease, though the distress chemicals released in those cases are odorless and invisible to humans. However, a device that could detect these evasive SOS signals might be on the horizon, new research suggests.

"Plants have a defense mechanism in which they release unique chemicals as means of communicating with other plants," researcher Ramaraja Ramasamy said in a statement from the University of Georgia. "And the signature is very specific to the type of stress that is experienced by the plants."

The chemicals are released well before the plants show any visible signs of disease or trauma and Ramasamy is working with a team to develop a chemical sensor that can pick up these early signals. He suggested that one day the technology could help reduce crop losses due to pests and pathogens. It might even allow farmers to cut back on their use of pesticides.

"You can create a network of sensors on a large field, and it can tell the farmer where the infection is," Ramasamy said. "Then, he can localize the application of pesticides or herbicides."

Such sensors could also be used in food storage to pick up signs of spoilage, Ramasamy explained in the statement.

"If you have a big bag of onions, for example, and one onion goes bad, that's going to affect the other onions in the bag," he said. "By the time you notice a bad onion, it's probably too late, but if you can detect that spoilage in advance, you can isolate it and prevent it from spreading."

Ramasamy and his team studied the detection of three different green leaf volatiles and published their results in the journal Analyst. Once they have a device ready, the researchers plan to put the technology to test in the field.