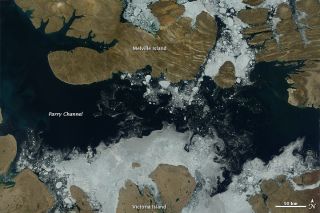 This image, taken on Aug. 3, 2012, shows that most of the ice in the Parry Channel, part of the Northwest Passage, has melted away.
(Image: © NASA Earth Observatory)

Sea ice has melted and part of the Arctic's Northwest Passage has opened, images captured by NASA's Terra satellite show.

An image taken on July 17 shows ice filled Parry Channel, part of the Passage, at that point. The second photo, taken two weeks later on Aug. 3, shows that most of the ice has melted away.

The Canadian Ice Service reported that ice cover in Parry Channel began to fall below the 30-year median level in mid-July, and the melting sped up in the following two weeks. At the end of July, there was only an ice cover of 30 percent, compared to a median of 79 percent.

While the Parry Channel appears almost entirely free of ice, it's not necessarily open for ships to pass through, according to a NASA release. Sea ice can be thin enough to avoid detection by satellite sensors yet still thick enough to impede ships.

Whether or not ships can easily pass, recent studies have suggested that certain organisms have begun to take advantage of the open water. When the Northwest Passage opened in 2007, a study found that a type of plankton usually found in the Pacific had turned up in the North Atlantic.

Another study found that Pacific and Atlantic populations of Bowhead whale began to overlap in the Northwest Passage in 2010, according to the release.

The search for a shortcut between Europe and Asia though the Arctic dates back to Columbus's journey to the Americas. For centuries, attempts failed due to unfamiliar geography and unforgiving ice.

The passage was first successfully navigated by Norwegian explorer Roald Amundsen in 1906. He used the southern route through the Northwest Passage; Parry Channel is part of the northern, shorter route.