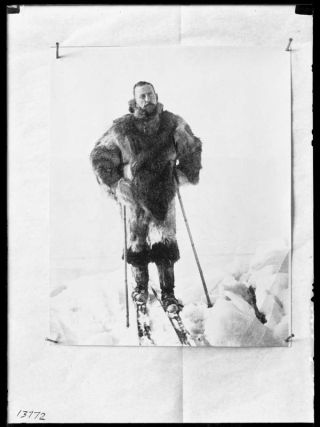 Investors in Norway are attempting to repossess a sunken ship in the Canadian Arctic that once belonged to storied Norwegian explorer Roald Amundsen, the first human to set foot at the South Pole.

The three-masted ship, called The Maud, sank at its moorings in Cambridge Bay in Canada's far north 80 years ago, and its hull still peeks above the frigid waves today. In the intervening decades, the shipwreck has become a tourist attraction, and locals don't want to see it go, Agence France-Presse reported.

A group of Norwegian investors wish to use balloons to raise the ship from its current resting place, load it onto a barge and send it across the Atlantic to be showcased in a museum.

"The incredibly strong-built oak ship has been helped by the Arctic cold and clean water to be kept in a reasonably good shape," said Jan Wanggaard, project manager for the Norwegian scheme, after a recent visit to the wreck, the AFP reported. [Related: On Ice: Stunning Images of Canadian Arctic]

The Maud, a 120-foot (36.5-meter) vessel named for Norway's queen at the time of Amundsen's explorations, was built to withstand frigid conditions. The ship left Norway in 1918 under Amundsen's command, with the aim of getting stuck in Arctic sea ice and floating through the Northwest Passage and across the North Pole.

Amundsen succeeded in the first of his goals the ship spent years at a time locked in the ice. However, had he attempted the voyage in recent years, the explorer would have confronted very different conditions. Scientists have observed a steep drop-off in Arctic sea ice in recent decades.

By 1930, the year the ship sank, Maud was serving as a warehouse and floating radio station in isolated Cambridge Bay, in what is now Canada's Nunavut province.

Asker, a seaside Norwegian town, purchased the wreck from Canadian authorities for a single dollar in 1990, but their permit to move the vessel has now expired.

A group of Norwegian investors, financed by developer Espen Tandberg and his brothers, hatched the new plan to reclaim the storied ship, and, if Canadian authorities agree, could begin excavation work in a year, AFP reported.

Although Amundsen was the first European explorer to sail through the Northwest Passage, in 1906, he is best known for his exploits at the opposite end of the globe.

Amundsen's dramatic race across Antarctica ended in glory for the Norwegian team they reached the South Pole on Dec. 14, 1912 but ended in tragedy for his opponent. Englishman Robert Falcon Scott, who reached the pole four weeks after Amundsen, died before he made it home, along with all of his men.

This year marks the centennial of the beginning of their famed race.