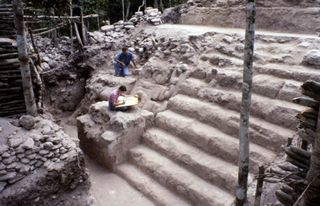 North face of the Jaguar Paw Temple, in the Tigre Complex at El Mirador, Guatemala, showing the east mask, stairway, and upper landing during excavations by Project El Mirador. Most of the Preclassic turkey bones were associated with this building.
(Image: © Photo courtesy of the Museum of Peoples and Cultures, Brigham Young University.)

The bones of Mexican turkeys discovered at a Mayan archaeological site in Guatemala may push back the domestication of this gobbler by 1,000 years, researchers say.

The find is also the oldest evidence for a Mexican turkey (Meleagris gallopavo gallopavo) in the Mayan world, with signs that the bones are the remains of an elite sacrifice or a feast, said lead researcher Erin Thornton, of the Florida Museum of Natural History and Trent University Archaeological Research Centre in Ontario.

"I did not expect to find Meleagris gallopavo gallopavo at the site as the species is not local to the Maya area," Thornton said. "The birds were likely traded in."

Turkeys served important roles for the Maya, including for food and sacrificial offerings. Their feathers, bones and other byproducts were often used to make medicines, musical instruments, personal adornments and tools. However, until this discovery, scientists assumed the Maya only used the native, wild ocellated turkey (Meleagris ocellata) throughout the Preclassic to Classic period that ended in A.D. 1000.

The thinking went that the Mexican turkey, domesticated at some point in central and northern Mexico, wasn't introduced until later, during the Postclassic period, between 1000 and 1500. [8 Terrific Turkey Facts]

Finding these bones south of the Mexican turkey's range, however, suggests it was traded into the Mayan region well before then, during the Late Preclassic period — from 300 B.C. to A.D. 100.

Though the researchers aren't certain the bones belong to a domesticated Mexican turkey, as there were wild Mexican turkeys, they have reasons to believe they were. The fact that the species was eventually domesticated in Mexico, "combined with the fact that we have what appear to be captive birds being transported outside their natural geographic range suggests that the species was being managed by humans during this time period," Thornton told LiveScience in an email.

The fossils were originally excavated in the 1980s at El Mirador, an ancient Mayan settlement located in what is now north-central Petén, Guatemala. They were displayed in the Brigham Young University Museum of Peoples and Cultures. And it wasn't until 2004 that they were sent to Thornton for identification. Her results are now published online (Aug. 8) in the journal PLoS ONE.

Most of the turkey bones were found at the Mayans' Jaguar Paw Temple, a 30-foot (9-meter)-high platform "topped by triadic architecture and decorated with sculptured stucco masks," the researchers write. Triadic architecture, developed by the Maya, involved a main structure with two inward-facing buildings on either side. Another turkey specimen was found on the east side of the Tigre Plaza, located in the center of the site.

Using chemical lab techniques, the researchers dated the bones to between 327 B.C. and A.D. 54.

"This research has consequences for understanding Maya subsistence because they would have had access to a controlled, managed resource," Thornton said. "The turkey bones came from right within the ceremonial precinct of the site, so these are probably the remains of some sort of elite sacrifice, meal or feast."