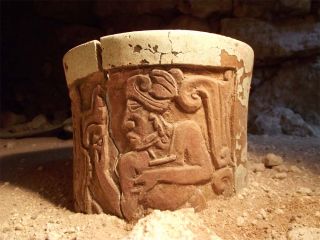 In the ruins of a royal complex in the Mayan city of Uxul, archaeologists found a tomb they believe belonged to a prince, who died 1,300 years ago. Here's one of the ceramic vessels they found buried with him.
(Image: © Uxul Archaeological Project/University of Bonn)

Excavators have uncovered what they believe to be the 1,300-year-old remains of a Mayan prince entombed within a royal complex of the ancient city of Uxul, located in Mexico near the Guatemalan border.

The fossilized man, who researchers estimate was between 20 and 25 when he died, was found lying on his back, with his arms folded inside a tomb 4.9 feet (1.5 meters) below the floor in a building within the city's royal complex.

When the researchers first slipped a camera into the tomb to peek at what was inside they saw ceramics at the feet of the skeleton, said Kai Delvendahl, field director for the project with the University of Bonn.

They found a total of nine pieces of ceramics, including a plate painted in the distinctively black-lined Mayan Codex-Style covering the man's skull. At Mayan sites, it is not uncommon to find plates placed over the skulls of the deceased, Delvendahl, said. [See Photos of Mayan Prince's Tomb]

The other ceramics offered additional clues. One bore hieroglyphics reading: "[This is] the drinking vessel of the young man/prince." A second vessel also bore a mention of a young man or prince.

However, if this young man had been a prince, he did not appear to be in line for the throne, the researchers believe, since certain status markers, such as jade jewelry, were not found.

One of the ceramic vessels bears a scene, which includes a date that corresponds to the year A.D. 711.

"Maybe the drinking cup was dedicated at that time, and if we assume the cup belonged to a person who died at age 20 to 25, we can more or less restrict the death," Delvendahl told LiveScience, meaning that the date on the cup gives archaeologists an idea of when the man died.

This is not the first tomb archaeologists have discovered in Uxul, as other, simpler tombs have also been uncovered, Delvendahl said.

The Mayan city of Uxul is located deep in the jungle, and accessible to archaeologists only for two to three months a year during the dry season. The researchers have found evidence that Uxul was ruled by the dynasty of Calakmul, a regional center 21 miles (34 kilometers) to the northeast.

The date on the vessel indicates the man was buried during a 90-year period after the Calakmul rulers had lost power in Uxul, and before Uxul was abandoned, Delvendahl said.

"We feel that the person that was buried there is a son of a local ruler, someone who was not in direct line to the throne, but we feel this ruler still had certain connections to the Calakmul dynasty," a connection supported by the style of the ceramics, he said.

Uxul has been the site of looting in the past, but the researchers found only one looter's trench into the building that contained the tomb, so they are hopeful they will find more tombs inside it.

Nikolai Grube, also of the University of Bonn, is project director for the research at Uxul, which is funded by the German Science Foundation (DFG). This latest discovery has not yet been published in a scientific journal.