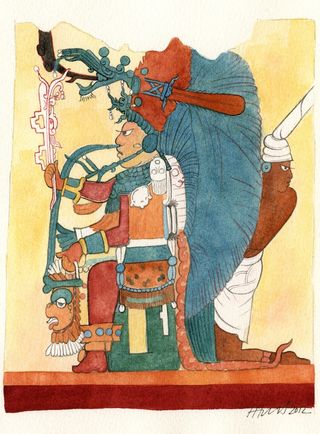 A Maya king, seated and wearing an elaborate head dress of blue feathers, adorns the north wall of the ruined house discovered at the Maya site of Xultún. An attendant, at right, leans out from behind the king’s head dress. The painting by artist Heather Hurst recreates the design and colors of the original Maya artwork at the site.
(Image: © Heather Hurst, copyright National Geographic Society)

The oldest-known version of the ancient Maya calendar has been discovered adorning a lavishly painted wall in the ruins of a city deep in the Guatemalan rainforest.

The hieroglyphs, painted in black and red, along with a colorful mural of a king and his mysterious attendants, seem to have been a sort of handy reference chart for court scribes in A.D. 800 — the astronomers and mathematicians of their day. Contrary to popular myth, this calendar isn't a countdown to the end of the world in December 2012, the study researchers said.

"The Mayan calendar is going to keep going for billions, trillions, octillions of years into the future," said archaeologist David Stuart of the University of Texas, who worked to decipher the glyphs. "Numbers we can't even wrap our heads around." [End of the World? Top Doomsday Fears]

The newly discovered calendar is complex indeed, featuring stacked bars and dots representing fives and ones and recording lunar cycles in six-month chunks of time. But it wasn't these mathematical notations that first caught the archeologists' eye. William Saturno, an archaeologist from Boston University, was mapping the ancient Maya city of Xultun in northeast Guatemala in 2010 when one of his undergraduate students peered into an old trench dug by looters and reported seeing traces of ancient paint.

The discovery was "certainly nothing to write home about," Saturno told reporters on Thursday (May 10), in advance of releasing details of the murals in this week's issue of the journal Science. Paint doesn't preserve well in the rain forest climate of Guatemala, and Saturno figured that the faint red and black lines his student had found weren't going to yield much information. But he felt he had a responsibility to excavate the room the looters had tried to reach, if only to be able to report the size of the structure along with the paint finding.

As Saturno continued along the old trench to the back wall, he was shocked to run into a brilliantly painted portrait: a Mayan king, sitting on his throne, wearing a red crown with blue feathers flowing out behind him. Another figure peeks out from behind him. On an adjoining wall, three loincloth-clad figures sit, wearing feathered headdresses. One is captioned "Older Brother Obsidian," or "Senior Obsidian," a still-mysterious title. Next to the king, a man painted in brilliant orange wearing jade bracelets reaches out with a stylus, likely identifying him as a scribe. He is labeled as "Younger Brother Obsidian," or perhaps "Junior Obsidian."  [See Photos of the Mayan murals]

It's not the end of the world

These paintings — covering the west and north walls of the small, 6-foot-by-6-foot room — weren't the only surprise Xultun had to offer. On the east wall, someone had painted a series of small, complex hieroglyphics. This, the researchers soon realized, was a calendar.

The calendar seemed to have been added after the murals were completed, as some of the numbers cover up painted figures on the wall. It's almost as if an ancient scribe got sick of flipping through a document to find his timekeeping chart and decided to put it on the wall for at-a-glance reference, Stuart said.

"It's kind of like having a whiteboard in your office where you're writing down formulas that you want to remember," he said.

The Maya recorded time in a series of cycles, including 400-year chunks called baktuns. It's these baktuns that have led to rumors of an end-of-the-world catastrophe on Dec. 21, 2012 — on that date, a cycle of 13 baktuns will be complete. But the idea that this means the end of the world is a misconception, Stuart said. In fact, Maya experts have known for a long time that the calendar doesn't end after the 13th baktun. It simply begins a new cycle. And the calendar encompasses much larger units than the baktun.

"There were 24 units of time they actually could have incorporated into their calendar," Stuart said. "Here, we're only seeing five units and they're still really big."

In one column, the ancient scribe even worked out a cycle of time recording 17 baktuns, the researchers found. In another spot, someone etched a "ring number" into the wall. These notations were used to record time in a previous cycle, thousands of years into the past. The calendar also appears to note the cycles of Mars and Venus, the researchers said. Symbols of gods head the top of each lunar cycle, suggesting that each cycle had its own patron deity.

"There was a lot more to the Maya calendar than just 13 baktuns," Stuart said.

The mural room gives an unprecedented glimpse into the work lives of Mayan scientists, Stuart said. The mural room is in a compound with several other rooms, which were collapsed and built over in later years. The murals only survived, because, instead of collapsing the room, Mayan engineers filled it with rubble and then built on top of it.

"This is clearly a space where someone important was living, this important household of the noble class, and here you also have a mathematician working in that space," Stuart said. "It's a great illustration of how closely those roles were connected in Mayan society."

Kings would have been extremely interested in timekeeping, Stuart said, because part of their job was to conduct rituals of renewal at certain times. Unfortunately, the name of the king pictured in the mural room has been lost.

Although Xultun was first discovered in 1915, less than 0.1 percent has been explored, Saturno said. Looters damaged much of the ancient city in the 1970s, meaning much of historical significance has been lost. But archaeologists still don't even know how far the boundaries of the town extend.

"[That] investigations can begin and in a house like this we can find something we've never seen before only speaks to the great wealth of scientific material that remains in Guatemala in the Maya area for us to discover," Saturno said.

The excavations of the mural room were funded by the National Geographic Society.