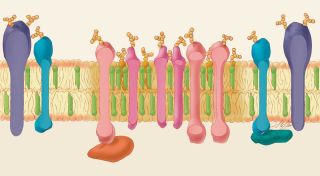 Cell membranes are made of lipids. By studying artificial membranes, scientists have learned that different lipids separate from each other based on their physical properties, forming small islands called lipid rafts. These rafts have a higher concentration of certain specialized lipids, called glycosphingolipids, and cholesterol than do non-raft parts of the membrane.
(Image: © Judith Stoffer.)

When you have your cholesterol checked, the doctor typically provides your levels of three fats found in the blood: LDL, HDL and triglycerides. But did you know your body contains thousands of other types of fats, or lipids?

In human plasma alone, researchers have identified some 600 different types relevant to our health. Many lipids are also associated with diseases — diabetes, stroke, cancer, arthritis, Alzheimer's disease, to name a few. Learning more about them could point to new ways to diagnose and treat lipid-related conditions.

Just as genomics and proteomics spurred advances in the study of genes and proteins, lipidomics has offered a more quantitative and systematic approach to lipids research. Much of the effort has been led by a research consortium called LIPID MAPS. With funding from the National Institutes of Health, LIPID MAPS’ first major activity was classifying lipids into eight main categories. Six include fats from mammals and the other two include fats from bacteria, plants and marine life. Cholesterol belongs to the "sterol" group, and triglycerides are "glycerolipids." Another category,"phospholipids," includes the hundreds of lipids that constitute the cell membrane and allow cells to send and receive signals.

Aside from describing more than 35,000 lipids and providing details about them via an open database, the scientists have found ways to make these oily substances easier for others to work with. This includes improving the ability to separate, quantify and analyze lipids from urine, blood, phlegm and biopsied tissue.

The overall effort has now made it possible to study how lipids change and interact over time. For example, by tracking the activity of about 500 fat species in mouse white blood cells, the LIPID MAPS scientists could measure hour-by-hour changes in lipid levels after the cells were exposed to an infection-fighting trigger — a bacterial endotoxin — and began to experience inflammation. They also studied what happened to lipid levels after the cells were exposed to a statin drug, which blocks cholesterol production, and after exposure to both the endotoxin and a statin.

The scientists observed some expected trends, like a reduction in cholesterol after exposure to a statin drug, but they noticed some surprising ones, too. Because statins also can reduce inflammation, the researchers expected to see fewer prostaglandins, which are inflammation-producing hormones made from lipids; instead, they saw an increase. While the scientists aren't yet sure why this happened, they have begun to produce a picture of lipid dynamics that could set the stage for a better understanding of these dynamics in human cells.

Another important question about lipids is how they work. If scientists can make an artificial cell membrane for their lab studies using only a few lipids, then why do real membranes need thousands? LDL brings cholesterol to a cell and HDL removes it, but what are the underlying mechanisms? Cod liver oil has been touted as a treatment for eczema, arthritis and heart disease for decades, but how does its active ingredient — a lipid called an omega-3 fatty acid — actually operate?

Using the lipidomics data and tools, members of LIPID MAPS have answered this last question.

Once again using mouse white blood cells, the scientists gave the cells supplements of pure fatty acids (fish oil is a mixture). These included eicosapentaenoic acid (EPA) and docosahexaenoic acid (DHA) — both polyunsaturated omega-3s. And as in the earlier study, they stimulated an immune response, including inflammation.

But these cells didn't display the typical response. Instead, EPA and DHA blocked the activity of an enzyme called COX, which helps convert an omega-6 fatty acid into the inflammatory prostaglandins. Inflammation is a common element of many diseases, so understanding how omega-3 fatty acids could stem it has tremendous therapeutic potential. This knowledge is just the tip of the fat-filled iceberg. We've already learned a lot about lipids, but much more remains to be discovered.