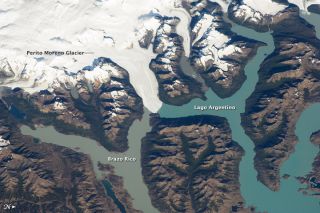 An astronaut aboard the International Space Station snapped this photo of Argentina's Perito Moreno glacier on Feb. 21, 2012, shortly before it catastrophically ruptured.
(Image: © NASA Earth Observatory)

An astronaut aboard the International Space Station snapped this photo of the Perito Moreno glacier, in Argentina's Andes Mountains, just before a dam of ice it creates burst.

The glacier descends from the Andes' Southern Patagonian Icefield, which is 6,825 feet (2,100 meters) above sea level, all the way down to Lake Argentino, at 590 feet (180 m) in elevation, according to a NASA release.

At 19 miles (30 kilometers) in length, it's one of the largest in Patagonia, a region at the southern tip of South America.

Perito Moreno is perhaps the region's most famous glacier because it periodically cuts off the major southern arm (known as Brazo Rico) of Lake Argentino, by forming a natural dam with its ice tongue; this prevents water from transferring between the two bodies of water.

Without the transfer, muddier and milkier water accumulates in Brazo Rico. Water flows down under the glacier from the mountains, not only carrying the mud into the lake but also helping lubricate the glacier's downhill movement.

Water pools in Brazo Rico until the stress is too much, and the ice tongue catastrophically ruptures. It breaks about every 4-5 years, when Brazo Rico's water levels swell as much as 98 feet (30 m) higher than those in Lake Argentino. This makes it a major tourist attraction in the region.

The last rupture occurred in March 2012, shortly after this image was taken on Feb. 21, 2012, with a Nikon D2Xs digital camera by an Expedition 30 crewmember.

After the rupture the glacier slowly inches back towards the opposite shoreline, where it soon forms another natural dam.