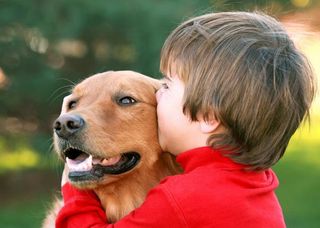 Getting a pet may help children with autism to develop their social skills, if the furry friend is brought into the home when the child is about 5 years old, according to a new French study.

Researchers found that children with autism who got a pet after age 5 showed improvement in their abilities to share with others and to offer comfort, whereas those who had a pet since they were born, and those who never had a pet, showed no such improvement.

"In individuals with autism, pet arrival in the family setting may bring about changes in specific aspects of their socio-emotional development," the researchers wrote in their study.

However, the study was small, and little is known about how pets may influence family dynamics and children's development, so further studies are needed, the researchers said.

About one in 88 U.S. children are diagnosed with an autism spectrum disorder, according to the Centers for Disease Control and Prevention. Autism can cause language delays, problems with social and communication skills and repetitive behaviors.

In the new study, researchers led by Marine Grandgeorge, of the Autism Resource Center at Hospital Bohars in France, looked at autistic children between ages 6 and 16 who were all attending a day-care facility in France.

The children's parents had completed a commonly used autism diagnostic test when the children were 4 or 5, and they completed it again at the time of the study. They also answered a questionnaire about their pets.

In one analysis, the researchers compared the social behaviors of 12 children with autism from families that got a pet after the child turned 5, with the behaviors of 12 autistic children who never owned a pet, but were matched with the pet owners for age, gender and general language abilities.

Results showed that those who got a pet, over time, showed fewer deficits in their abilities to share food or toys with their parents or other children, while those who never owned pets didn't show such an improvement. Additionally, those with pets also became better at offering comfort to parents or children who were sad or hurt, according to the study. The type of pet didn’t matter (although all the pets in the study were dogs, cats or hamsters), and neither did the child's gender.

In a separate analysis, the researchers compared eight children with autism who had a pet in their home since birth, with eight similar children who never owned a pet. They found that those who'd had pets  their entire lives were no different than those without pets, in terms of how their social skills changed over time.

Additionally, the study showed that children who got a pet when they were young tended to interact with the animal, spending time petting it and playing with it. In contrast, those with pets since birth showed far fewer of these interactions.

The researchers noted that there were many social behaviors for which there was no improvement in the children who got a pet at a young age. The test they used, aside from measuring children's abilities to share and comfort others, also assessed behaviors such as social smiling, imaginative play with peers, and the ability to engage in a reciprocal conversation.

Why pets may help kids with autism

Pets can directly influence human behaviors. "When a human and a pet are interacting, each partner uses signals emitted by the other to adjust their behavior," the researchers wrote. Pets can also promote interactions between family members, which can promote a child's development.

But further explanation is needed to explain why the differences were seen between children with pets since birth and those who got them at a young age. It might be expected that the longer a child had a pet, they more benefited, but that's not what was seen, the researchers said.

It may be that the novelty of a new pet is particularly appealing to children with autism, or it could be that a new pet strengthens the family's bonds, and increases interactions between family members, they said.

The findings are published online today (Aug. 1) in the journal PLoS ONE.