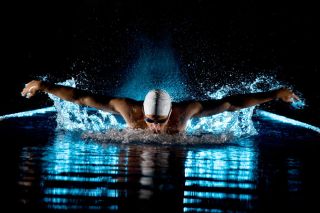 Asthma is the most common chronic disease among athletes at the Olympic Games, a new study says.

About 8 percent of Olympic athletes have asthma or one of its symptoms, a narrowing of the airways, the study found.

The study analyzed information from athletes at the last five summer and winter Olympic Games, from 2002 to 2010. It identified athletes who took inhaled beta-2 agonists, an asthma drug.

The condition was most common among athletes who took part in endurance sports, said study researcher Kenneth Fitch, of the University of Western Australia.

The relatively late onset of asthma in many older athletes suggests to that the years of intense training could be one of the causes, Fitch said.

"Inhaling polluted or cold air is considered an important factor which might explain the cause in some sports, but not in all," Fitch said.

Athletes with asthma and narrowed airways have continued to do well in sports' competitions and outperform others, Fitch said.

Fitch said it's possible that training harder than the other competitors could be one reason many athletes develop asthma during adult life.

The study was published online Jan. 8 in the British Journal of Sports Medicine.

Pass it on: About eight percent of Olympic athletes have asthma.