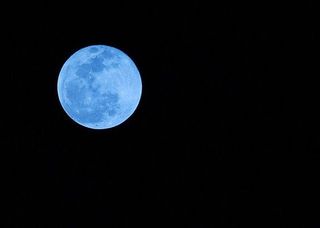 You're in luck if you've been waiting to spy a blue moon hovering in our skies. August heavens will be graced with two full moons, the first on Aug. 1, and the second Aug. 31, with this glowing sphere often labeled a blue moon.

Earth's only satellite, however, will look like it normally does on any other night. Even so, August's second full moon is considered relatively rare, though two full moons in one month occurs on average every 2.66 years. [5 Mad Myths About the Moon]

Why? The lunar month lasts about 29.5 days, or the time it takes to circle once around Earth, during which time it goes through all of its phases, from new moon to full moon to new moon (when the moon is between Earth and the sun). We see the moon because of sunlight reflecting off its surface, and as it travels around our planet we see different amounts of its sunlit side. During a full moon, that means we are seeing the full sunlit face of the moon.

Usually months have only one of these full moons, but since Earthly months are 30 or 31 days long, it's possible to sneak in two full moons in one of these calendar months. [Infographic: Blue Moons Explained]

A blue-hued moon isn't unheard of, nor is a green-colored one. In 1883, the Indonesian volcano named Krakatoa erupted, sending plumes of ash high into the atmosphere. Some of the ash-clouds were filled with particles just the right size to strongly scatter red light, while allowing other colors to pass, according to NASA. White moonbeams shining through the clouds emerged blue, and sometimes green, NASA writes on their website.