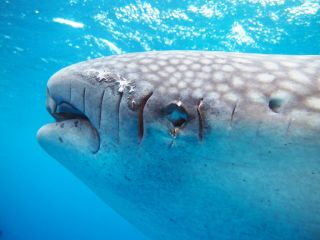 The whale shark "Fermin" sports slashes from a run-in with a boat propeller. One cut runs across his left eye.
(Image: © Physalus)

A whale shark nicknamed Fermin who has become a popular tourist attraction in the Philippines has been slashed across the face by a boat propeller, marine biologists report.

The gentle giant — whale sharks can grown more than 40 feet (12 meters) long but eat mostly tiny plankton — is a common sight in the tourist area in Tan-awan, Oslob, a resort town in Cebu. In this area of ocean, boat operators are allowed to feed whale sharks, bringing them near their boats so tourists can see the enormous fish close up.

The practice is a popular one, but marine biologists are concerned. Not only does feeding sharks teach them to associate boats with free meals, said Samantha Craven, a scientist with the Philippines Large Marine Vertebrates Project, it also seems to dissuade the sharks from their natural migrations.

"If these sharks reach sexual maturity and don't migrate to breeding grounds, they are effectively removed from the population and would no longer be adding to the numbers of genetic diversity of their species, which is listed as 'vulnerable to extinction' by the IUCN [International Union for Conservation of Nature]," Craven told LiveScience. [Gallery: The Mysterious Lives of Whale Sharks]

Fermin is one of six whale sharks that has been feeding from the tourist boats nearly daily since late March, according to the Large Marine Vertebrates Project. The group, part of the nongovernmental organization Physalus, is the only one doing research in this area of the ocean.

Most days, a dozen or more sharks show up, Craven said, but Fermin is one of the most regular boat visitors. Between July 17 and July 19, though, Fermin disappeared. When he returned on July 20, his face was scarred with 11 deep cuts, one right across his left eye.

Whale sharks are vulnerable to propeller cuts because they're difficult to see when they swim just below the surface, Craven said. But most whale sharks that have been hit show scars on their backs or fins, indicating they've been run over. Fermin's injuries are different.

"Fermin's scars are at the front of his face, indicating contact was made head-on, as if he actively approached the boat," Craven said. [See images of Fermin's Injuries]

The grisly wounds likely came from a small propeller boat. No motor boats are allowed within the Tan-awan feeding area, and it is not clear where Fermin had his run-in. It's likely, however, that he approached a boat looking for food and came away with an injury instead.

The whale sharks that feed at Tan-awan all sport odd calluses around their mouths where they rub against the boats as fishermen drop shrimp meals into the water, Craven said. But recently, more troubling marks have been showing up.

"Since June, we have seen an increase in smaller propeller scars on the regular sharks," Craven said. "None as severe as Fermin, but I worry that it is a matter of time."

The ethics of shark feeding

Strict rules govern the interactions between humans and sharks in the Tan-awan feeding area. No more than six tourists and four scuba divers may approach one shark at a time, and no one may touch the sharks. Only members of the local fisherman's association are allowed to feed the animals.

The rules are good ones, Craven said, but they're broken "on a daily basis." The situation pits conservation against education and tourism dollars.

"I do believe that increased education and awareness about whale sharks is important, but this is a high price to pay, when more sustainable options are already proven," Craven said. "Even if there was a way to feed the sharks without creating an association of food with boats and people, we are still preventing them from migrating."

Whale shark researcher Jennifer Schmidt, a biologist at the University of Illinois at Chicago, said she felt "sick to her stomach" when she saw the photographs of Fermin's injuries. Properly regulated ecotourism that allows divers to swim alongside naturally feeding sharks doesn't seem to disrupt these threatened animals' behavior, Schmidt said. But feeding the sharks appears to be a recipe for disaster.

"I was in Oslob in April, and I saw the situation there — boats, many boats, and sharks and swimmers and even divers all in an extremely chaotic mix," Schmidt said. "It was only a matter of time before either a shark or a person was injured, and unfortunately as long as this activity continues more sharks will be injured, even killed."

Since his disappearance and injury, Fermin has returned to the feeding area almost daily, Craven said. His wounds appear to be healing, but he usually has his eye rolled back. Whale sharks commonly roll their eyes back to protect them, but Craven said it's not clear whether Fermin is rolling back his eye because of pain or because scar tissue is hindering his ability to move his eye muscles.

"I think we have to wait to see how the wounds heal, and see how the eye is over the next two weeks before we will know more," Craven said.

The popularity of Tan-awan's whale shark feedings has spurred the nearby town of Moalboal to look into allowing similar interactions in their stretch of coastline. One Philippine senator has proposed banning whale shark feeding nationally, Craven said, but it is uncertain if it will be approved.

"I think this industry is so lucrative that one shark with a bad propeller cut is not enough to stop it locally," Craven said. "It will only stop if there is regulation from national law, coupled with education on the ground as to why it is bad, and what alternative activities can be run."