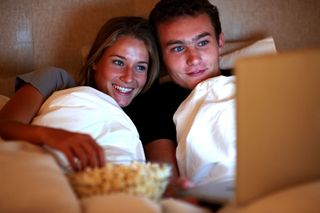 The amount of sex kids see in movies could influence their sexual behavior later in life, a new study says.

The study found an association, and not a cause-effect link. However, "sensation seeking, or the tendency to seek more novel and intense sexual stimulation, does seem to increase in young people who watched more movies with sexually explicit content," said study researcher Ross O'Hara, a researcher at the University of Missouri.

O'Hara and colleagues analyzed information from 1,228 kids who were 12 and 14 years old at the study's start.

Each participant reported which movies they had seen out of a list of the 50 top-grossing films from 1998 to 2004. These films had been evaluated to measure their sexual content.

Six years later, the participants were surveyed to find out how old they were when they became sexually active, and how risky their sexual behavior was, including whether they used condoms consistently, or had multiple partners.

Teens who reported watching movies with more sexual content started having sex at younger ages, had more sexual partners, and were less likely to use condoms with casual sex partners, the study found.

The results held when the researchers took into account factors that could effect when a person becomes sexually active, including their socioeconomic status, family structure and TV use.

"Few [films] showed contraceptive use or safe sexual practices," O'Hara said. "When safe sex is portrayed in films, it is often in comedies and is presented as an inconvenience or embarrassment. The motion picture industry could make an effort to show healthier, safer behaviors, just as they have reduced the amount of smoking shown in films," he said.

To minimize risky sexual behavior later in life, parents can restrict the amount of sexual content children view and educate them about the consequences of sexual behavior that are often left out of films, O'Hara said.

The study will be published in an upcoming issue of the journal Psychological Science. O’Hara conducted this research while at Dartmouth College.

Pass it on:  Young teens who watch movies with more sexual content tend to become sexually active at an earlier age.