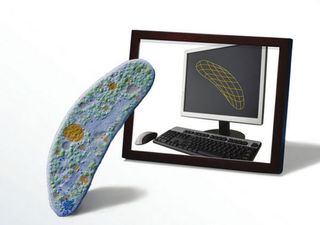 A microbe that causes sexually transmitted infections now has a much more awe-inspiring claim to fame: It has become the first organism to be completely simulated by a computer model.

The bug in question, Mycoplasma genitalium, is a good candidate for scientists to reconstruct using a computer, because it is truly tiny, with only 525 genes. (By comparison, humans have about 20,500 genes.)

This accomplishment opens the door for creating more complicated virtual organisms, potentially accelerating research and making it possible for bioengineers to use computers to design organisms, said lead researcher Markus Covert, a professor of bioengineering at Stanford University.

Using these computer-model organisms, researchers could test out ideas and compare their results to what is seen in living things. In particular, these virtual "organisms" could help them probe the complexity of many biological phenomena, Covert said.

For example, if so many different genes linked with cancer are known, why hasn't it been cured?

"The answer is simply cancer is not a one-gene phenomenon, it's thousands of genes interacting together, and other factors interacting in complicated ways," Covert told LiveScience. "The fact is, we won't be able to understand how those things interact together unless we use a rational, computer-based approach."

To create the model organism, Covert and colleagues combed more than 900 sources of information about the single-celled M. genitalium, which can cause inflammation of the urethra and the cervix, as well as pelvic inflammatory disease. They built a model of the organism's genetic structures and machinery for each of 28 cellular processes, such as the replication of DNA (deoxyribonucleic acid, the code that makes up genes) and cell division. They then put these models together to simulate a whole cell.

Covert and colleagues have live M. genitalium microbes in the lab, which they used to test the model's predictions.

Their results are outlined today (July 20) in the journal Cell.