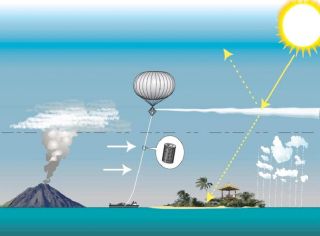 A new project will investigate the feasibility of one so-called geoengineering technique: the idea of simulating volcanic eruptions that release small particles into the stratosphere, which then reflect some of the incoming solar radiation back into space, with the effect of cooling the Earth. Not all scientists agree this could work.
(Image: © Hugh Hunt, SPICE project)

A U.S. geoengineering project aimed at using a balloon to spray sun-reflecting particles comes just a few months after the cancellation of a similar British experiment.

The new plan would test a planet-cooling technology for fighting rising temperatures related to climate change, according to The Guardian. Inspiration for the idea comes from how Earth's volcanoes have historically had a cooling effect on the planet by spewing sulfate particles into the atmosphere.

Two Harvard engineers plan to launch the balloon on a flight over Fort Sumner, New Mexico. One of the engineers, Keith David, also happens to head a geoengineering research fund provided by Microsoft founder Bill Gates. [Changing Earth: 7 Ideas to Geoengineer Our Planet]

David opposed the cancelled British geoengineering effort, called SPICE, because he said it would not have contributed to better understanding the impact of geoengineering. But he plans to draw lessons from the British effort as he and his colleague, James Anderson, prepare for their own experiment within a year.

Geoengineering ideas have usually tried to counter global warming by either reducing heat-trapping carbon dioxide (CO2) or reflecting sunlight back into space. But the idea remains controversial among scientists who argue the cure could prove worse than the disease, so to speak — a European study recently suggested that planet-cooling efforts based on reflecting sunlight would slash the amount of rainfall in North America and northern Eurasia.